Morphological types of anaemia integrated with distribution of red cell and platelet indices: Study in a rural tertiary healthcare centre

Background: Anaemia is a critical global health problem. A good morphological subtyping of anaemia can guide clinician in further patient management. With the advent of automation, red cell and platelet indices are available from the routinely used blood cell counters in the laboratory, these supplemented with peripheral smear examination help in a good categorization of anaemia. Aim of this study is to study the morphological types of anaemias in the adults with the Objectives of Categorization of the anaemias based on morphology and to study the distribution of the red cell and platelet indices in the same.

Materials and Methods: It was a prospective study conducted in the hematology wing of our central diagnostics over a period of three months and a total of 520 cases, which were morphologically classified according to the analyzer indices and peripheral smear. Distribution of the red cell and platelet indices in the different categories of anaemia were also noted.

Conclusion: Anaemias in the rural set up are predominantly of the microcytic in type. A good knowledge of the variation in RBC indices, RDW and platelet /mean platelet volume ratio along with a peripheral smear can help the reporting haematologist identify early stages of iron deficiency anaemia and can give a precise and accurate anaemia categorization at the basic entry level of laboratory investigation.

Key Messages: Interpretation of variation in RBC and platelet indices though often neglected can contribute significantly to categorize the anaemia.

Anaemia is a universal health issue affecting both developing and developed countries having major impact on human health as well as social and economic development.1, 2 The estimated prevalence of anaemia in developing countries like ours is 39% in children <5 years, 48% in children 5–14 years, 42% in women 15–59 years, 30% in men 15–59 years, and 45% in adults >60 years.3 Presenting symptoms of anaemia being non – specific, and by itself it being a non- specific diagnosis, the initial morphological classification of anaemia & simultaneous correlation with red blood cell indices and morphological characteristics plays a crucial role in deciding the further clinical management.3 With the advent of automation in haematology the red cell & platelet parameters given by the analyzers can be used to a large extent to subcategorize the various anaemias within a short time without any extra cost. In addition knowledge of interpretation of the Red Blood Cell (RBC) histogram can support the diagnosis of dimorphic anaemia of megaloblastic etiology.4, 5

The present study was carried out to study the morphological types of anaemias and their correlation with the RBC and platelet parameters in a rural health setting.

The present study was conducted in the haematology wing, Department of Pathology, Central Diagnostics of our Institute. It was a descriptive and cross sectional study done over a period of 8 months from November 2019 to June 2020 with 520 cases.

All cases of anaemia (Haemoglobin <11 gm%) from both the sexes with age more than 15 years were included in the study.

Method of collection of Data

The venous blood samples were collected from patients in Ethylene Diamine Tetracetic Acid (EDTA) vacutainers with request of complete blood count and complete haemogram sent from different clinical departments. The samples were run in the three part haematology analyser ERBA H360. Daily quality checks were done as per standard protocols. Of the total 3072 samples received for the above tests during the study period, 520 samples fitted into the inclusion criteria. RBC, platelet parameters and histograms of the 520 cases were noted. Peripheral smears were prepared for the same and stained by Leishman stain. The parameters were correlated with peripheral smear findings and histograms as given by the autoanalyzer. Categorization of anaemia was done based on combination of smear and autoanalyzer findings.

Descriptive statistics like frequencies, percentages were used to describe the characteristics of study population. Measure of central tendency such as mean was computed for various parameters (RBC and Platelet indices).SSPS software version 21 was used.

The age group of the patients included in this study ranged from fifteen to hundred years.

Distribution of age and sex in anaemia cases 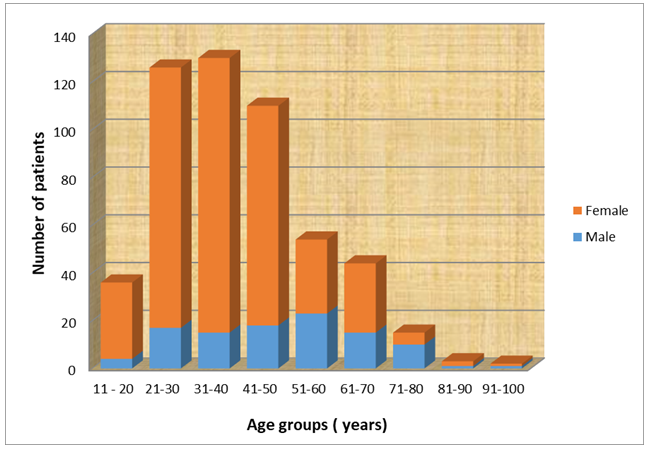 Distribution of different types of anaemia 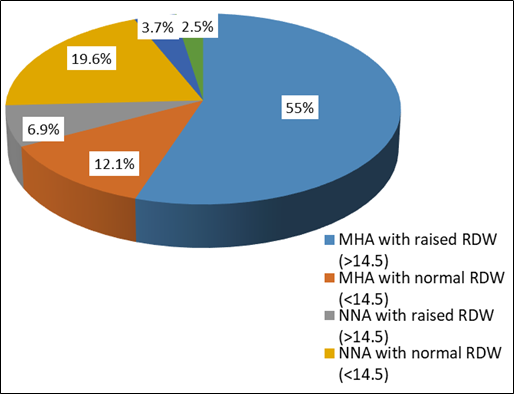 Distribution of RBC indices in different types of anaemia

Distribution of platelet indices in different types of anaemia

Anaemia is a global disease known to people worldwide, specially in developing countries like ours. In addition to the underlying cause low socio – economic status, lack of health education and access to healthcare with most of the population being rural are contributory factors.6 Studies have been conducted in special target groups like females, pregnant women and children till date. However in the present study we have included both males and females as they come from a rural background to our institute which is located in close vicinity. This will not only give a vague idea on the distribution of the pattern of anaemia but also help study the average value of haematological indices in this study population, which when done on a larger scale help setting up reference ranges for the same.

The age old classification of anaemia based on etiology and morphology till date remains unchanged as an indispensable tool for the initial evaluation of this non -specific diagnosis.9 With the advent of automation in medical laboratory, haematology analyzers are capable of giving a wide variety of red cell and platelet indices precisely and accurately. At the same time, examination of a well stained peripheral smear is an indispensable tool that throws light on associated features of the blood elements.10 Hence, a good knowledge about the interpretation of these analyser generated indices integrated with a peripheral smear examination, is not only time saving and cost effective but also ensures the sign off of a precise diagnosis of the type of anaemia by the reporting haematologist. Hence in the present study an integrated approach combining the autoanalyzer generated indices and manual peripheral smear examination was used to categorize the anaemia.

The most accepted morphological classification of anaemia is the one based on the RBC indices as microcytic, macrocytic and normocytic.11 The additions in the present study were inclusion of dimorphic anaemia based on RBC histogram and also subcategorization of the normocytic and microcytic anaemias based on the RDW value. Microcytic hypochromic anaemia was the most common type seen in our stud in both males & females which is in accordance with other Indian studies.3, 12, 13 The most common well known causes of this type of anaemia being iron deficiency. Other causes can be Thalassemia, sideroblastic anaemia and anaemia of chronic diseases.14

It is a well known fact that an increased RDW representing red cell anisocytosis is one of the earliest indicators of iron deficiency that is reflected even in the latent phase.15, 16 NNA with increased RDW, when combined along with the presence of microcytes on peripheral smears constituted 6.9% of cases in our study. This group can be considered as those with in early stages of iron deficiency anaemia. With a background knowledge of the same, prophylactic iron therapy can be given and patients followed up, thereby avoiding a requesting of iron profile at this stage.

NNA was the 2nd most common type of anaemia in our study which is similar to study done by Faiza and Elsayid et al.1, 8 The main concern about NNA is to find out the cause and prescribe proper treatment. The etiological factors can be renal diseases, or increased red cell destruction due to any underlying cause.17

Dimporphic anaemia was diagnosed taken into account a varying sized RBC population on smear. This pattern is seen in cases of microcytic anemias on treatment, treatment with hematinic agents and post iron treatment of iron deficiency co existing with megaloblastic anaemia.3 MCV represents only mean of the distribution curve, and many a times is not sensitive to a small number of micro and macrocytes. MCH & MCHC also may not contribute much to the diagnosis. This underlines the importance of peripheral smear examination to categorize the anaemias.

Iron deficiency is known to stimulate the megakaryopoesis. Hence it comes as no surprise that MHA cases in the present study were associated with a relatively higher mean platelet count. Recent studies in literature have shown that the Mean Platelet Volume (MPV)/ platelet ratio can be used as an indicator to differentiate Iron Deficiency Anaemias(IDA) from non Iron Deficiency Anaemias. Though in our study we have not taken into account the iron profile status, the MPV/platelet ratio in the non -MHA category was significantly more than the MHA, affirming that the major cause of MHA is attributed to iron deficiency.18

The mean red cell volume of macrocytic anaemias in our study was 103 fl which is similar to other studies.19, 20 The most common cause of macrocytic anaemias are megaloblastic anaemia, alcoholism, liver disease and hypothyroidism.21 The analyser can at times spuriously count the polychromatophilic cells and agglutinins as macrocytes, once again highlighting the importance of a peripheral smear examination as done in our study. Limitation of the studies are first of all many of our patients had come with symptoms unrelated to anaemia, this being an incidental finding. Second, study location is a hospital catering. majorly to a rural population with low socio-economic status. More stringent criteria for sampling and larger scale studies in general population would help establish the association between the indices and morphology.

A study of basic red cell parameters given by the analysers, supplemented with peripheral smear examination is definitive for the initial classification of anaemia. This not only reduces inter observer variations but also helps to rule out false positive categorization. A keen observation on the change in overlooked parameters like RDW, Mean platelet volume / platelet count ratio can help early detection of the more commonly encountered microcytic anaemia of iron deficiency etiology thereby avoiding high end investigations at an entry level, especially in the rural population to whom the affordability and availability of testing maybe challenging.

All the authors declare that they have no conflict of interest of any type pertaining to the study.

We would like to thank our dedicated haematology technicians of the Central laboratory who run the patient samples maintaining standard laboratory protocols.