Bhargava and Bhatia: Clinicopathological study of Tubo ovarian masses- A study of 110 cases

Clinicopathological study of Tubo ovarian masses- A study of 110 cases

Introduction: An adnexal mass is a common clinical presentation in gynecological practice. Differential diagnosis of an adnexal mass can vary from a life threatening emergency like ectopic gestation to a malignant lesion with a high mortality rate, so it poses diagnostic challenge for treating gynecologist.

Aim: To study the histopathological nature of adnexal masses.

Material and Methods: 110 cases of adnexal masses who underwent surgical intervention during the study period of one year were included in the study. Specimen received in the department of Pathology and was subjected to histopathological examination.

Results: A total of 110 cases formed the study group. In our study 79% of cases of adnexal masses had an ovarian origin, 15.45% cases were of tubal origin and 5.45% cases had combined pathology i.e due to tubovarian abscess and endometriosis. Among Ovarian lesions 9.1% had non neoplastic cyst like corpus luteal cyst or endometriosis whereas 50% cases had a surface epithelial lesion. 77 cases out of a total of 110 were ovarian in origin, out of which 57(74%) were benign, 05(6.5%) were borderline and 15(19.5%) were malignant.

An adnexal mass (mass arising from ovary, fallopian tube or the surrounding connective tissue) is a common clinical presentation in gynecological practice. The term Adnexal mass is most often used to denote masses arising from the ovary because of high propensity of ovary for neoplasia. Differential diagnosis of an adnexal mass is complex and can vary from functional cyst to life threatening ectopic pregnancies to ovarian malignancy.1

Ovarian Cancer remains the leading cause of cancer among females and constitutes about 30% of all cancers of female genital tract.2 Globally Ovarian malignancy is the sixth most common cancer (age standardized incidence rate 6.6/100,000) and seventh leading cause of cancer deaths (Mortality rate 4.0/100,000).3, 4 In India ovarian cancer has emerged as the third common malignancy among females with an incidence varying between 5.4-8 per 100000 population.5

Since ovarian malignancies have very few and non-specific symptoms they are mostly diagnosed at a very late stage leading to a very poor prognosis in most cases. The overall 5-year survival is approximately 45%, primarily due to the late stage of the diagnosis of the disease. Early detection of ovarian malignancy is of paramount importance as it would lead to better prognosis. Histopathology remains the gold standard for diagnosis of Ovarian Malignancy.

The study was carried out in a government medical college and hospital. The study was conducted on adnexal masses which were operated in Department of Obstetrics and Gynecology and Surgery during a period of one year from July 2018 to 2019 and specimens sent to department of Pathology for Histopathological examination.

Prior approval from the Institutional Ethics committee was sought. Written consent was taken from all patients and details were recorded on a pre designed proforma. Detailed Clinical history, ultrasound findings, CA 125 levels (wherever available) was recorded in the proforma.

A total of 110 cases of adnexal masses were included in the study. Specimens received in the department of Pathology were labeled, Gross examination was done and the tissue was preserved in 10% formalin immediately. After fixation of the tissue for 24-48 hours, it was sectioned and processed for microscopy. Slides were stained with Hematoxylin and Eosin stain.

A total of 110 cases formed the study group. In our study most of the patients were in their reproductive age group i.e. in 21-40 years, they comprised 58.18% of cases of adnexal masses. The youngest patient in our study was of 15 years of age and the oldest was of 75 years of age. (Table 1).

In present study we found that 79% of adnexal masses were due to ovarian pathology, 15.45% cases were due to tubal lesion mostly due to ectopic gestation, only 5.45% cases had combined pathology i.e. due tubovarian absecess and endometriosis.(Table 2)

Our study revealed that most common of adnexal masses due to ectopic gestation or benignancy were seen upto 2nd decade of life. Inflammatory lesions were mostly in 3rd to 4th decade similarly incidence of malignancy was increased with increasing age.(Table 3)

The most common clinical symptom noted in our study was Pain Abdomen, followed by palpable lump and menstrual irregularities. Some patients also had symptoms of dysuria, weight loss and fatigue (Table 4).

In our study 79% of cases of adnexal masses had an ovarian origin, 15.45% cases were of tubal origin and 5.45% cases had combined pathology i.e due to tubovarian abscess and endometriosis. Among Ovarian lesions 9.1% had non neoplastic cyst like corpus luteal cyst or endometriosis whereas 50% cases had a surface epithelial lesion (Table 5, Table 6).

77 cases out of a total of 110 were ovarian in origin, out of which 57(74%) were benign, 05(6.5%) were borderline and 15(19.5%) were malignant. The most common benign lesion was serous cystadenoma (21 cases) followed by mucinous cyst adenoma (14 cases). The most common malignant lesion was Papillary adenocarcinoma (10 cases) followed by metastatic adenocarcinoma (3 cases). 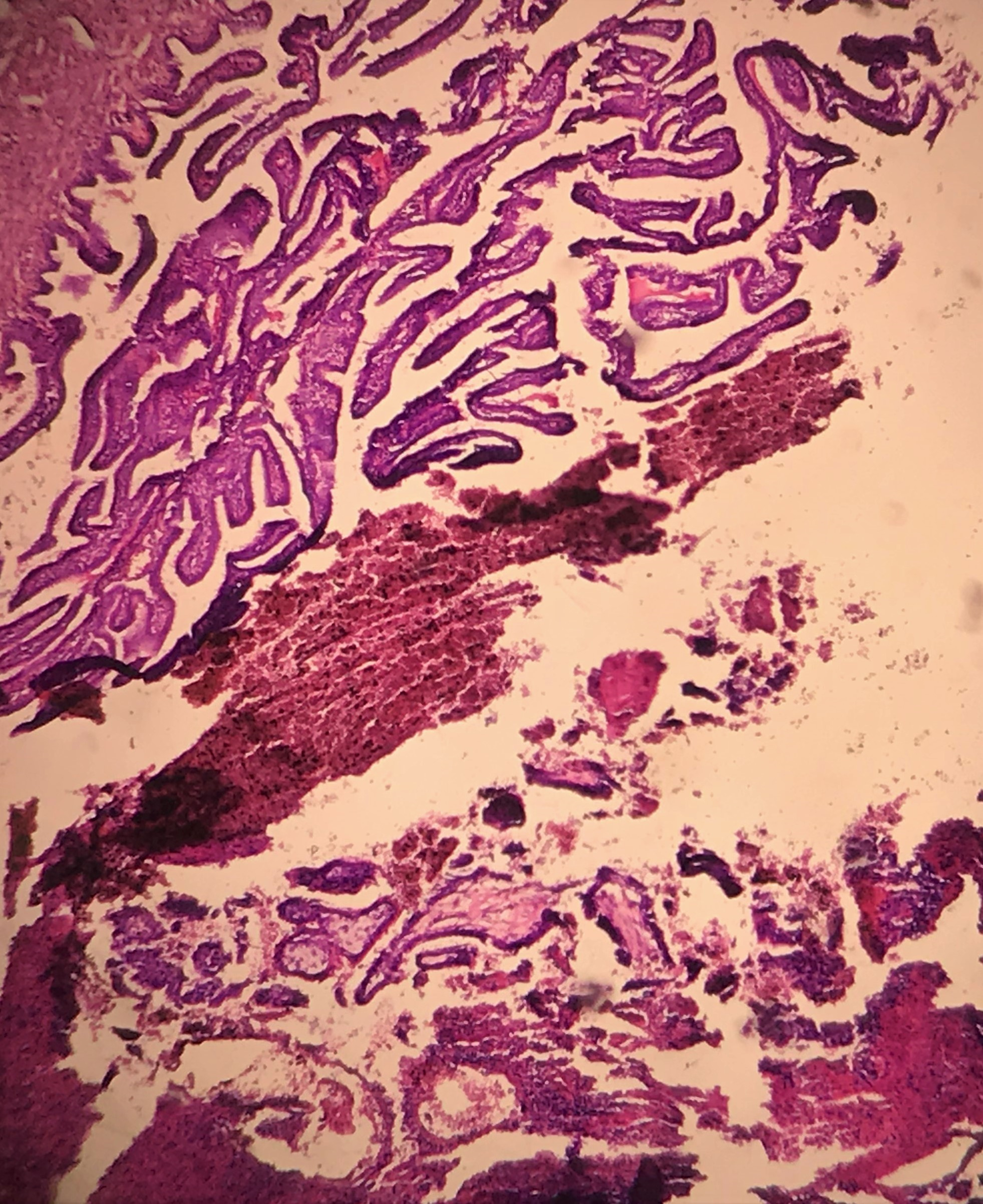 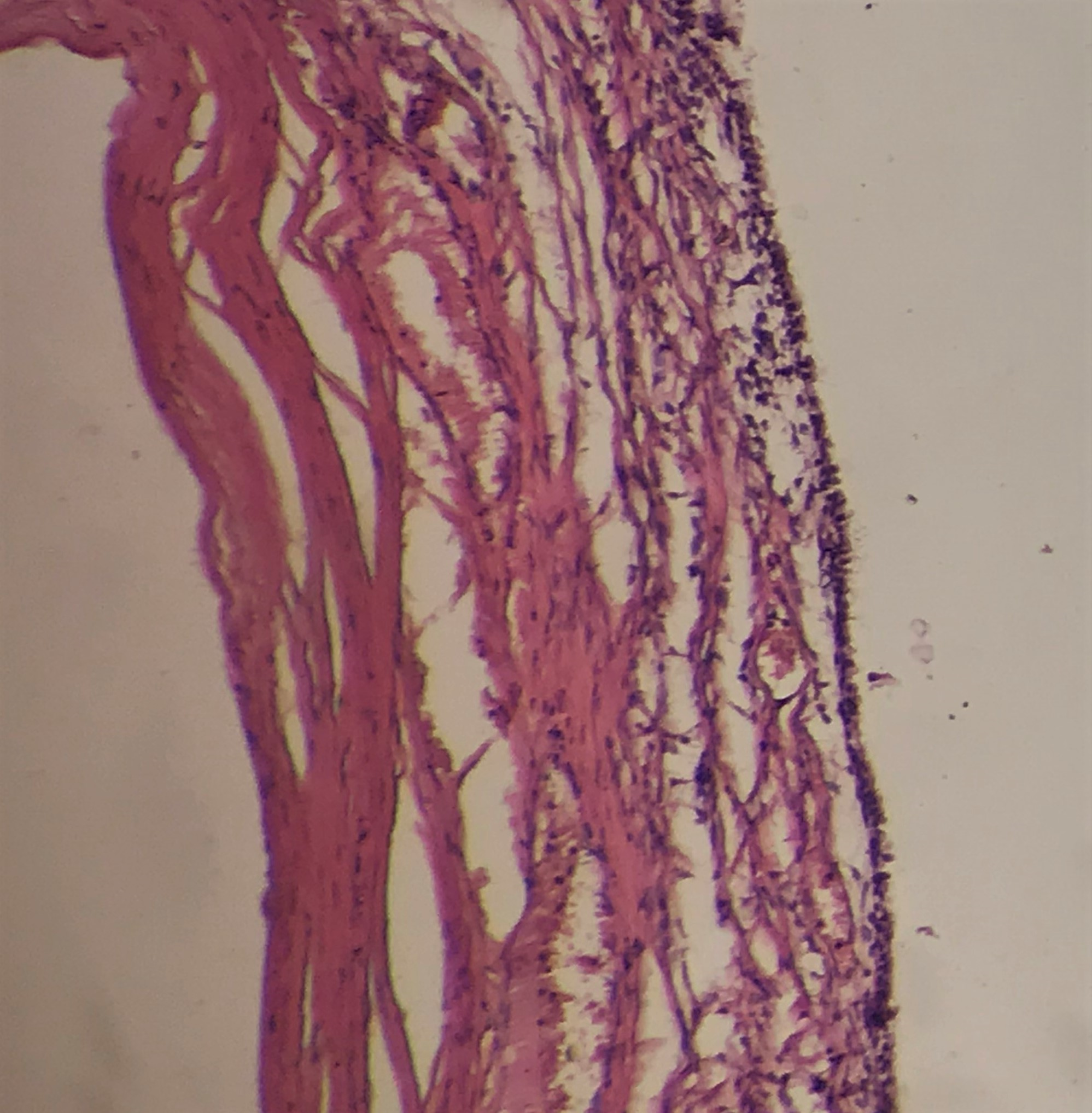 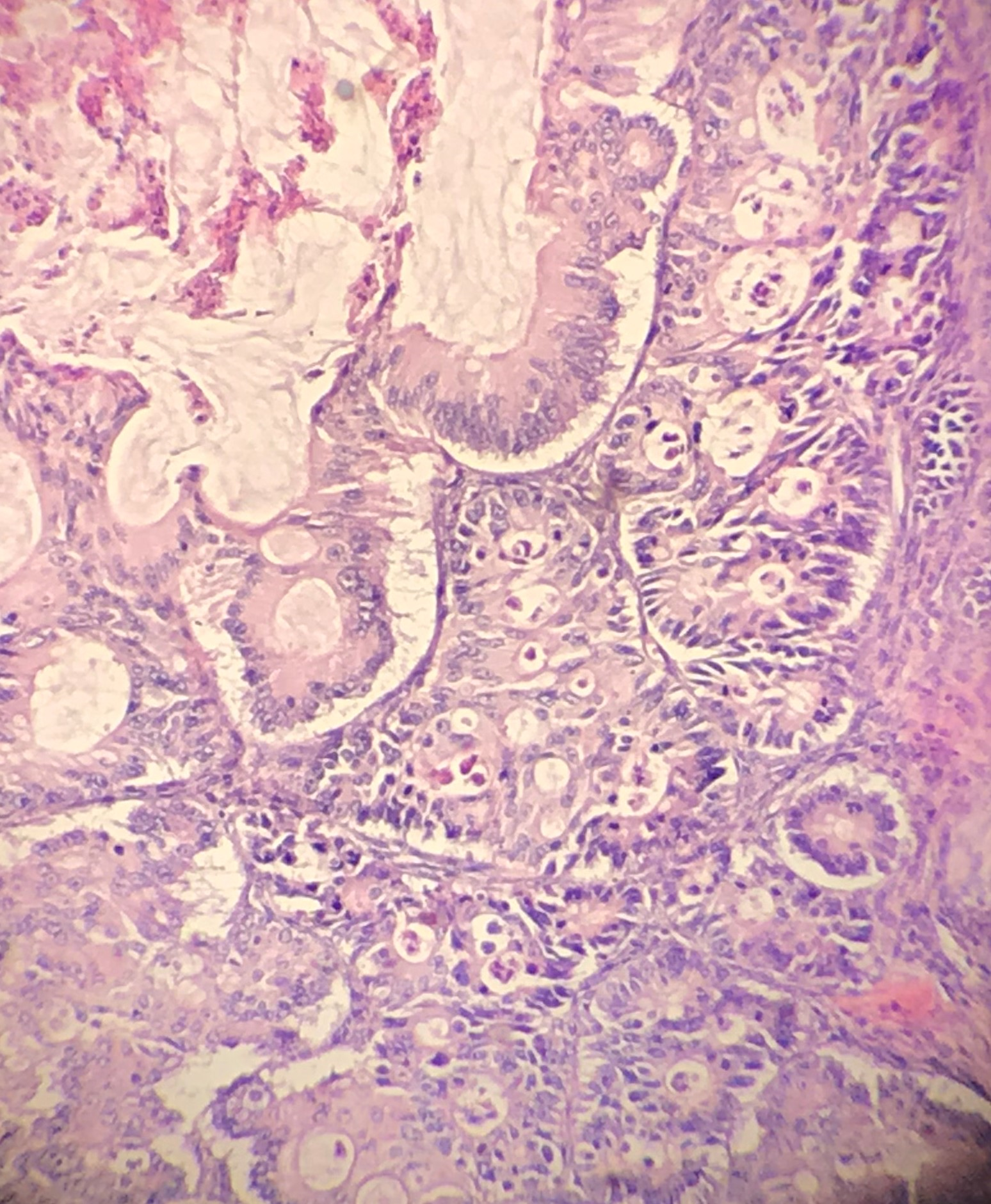 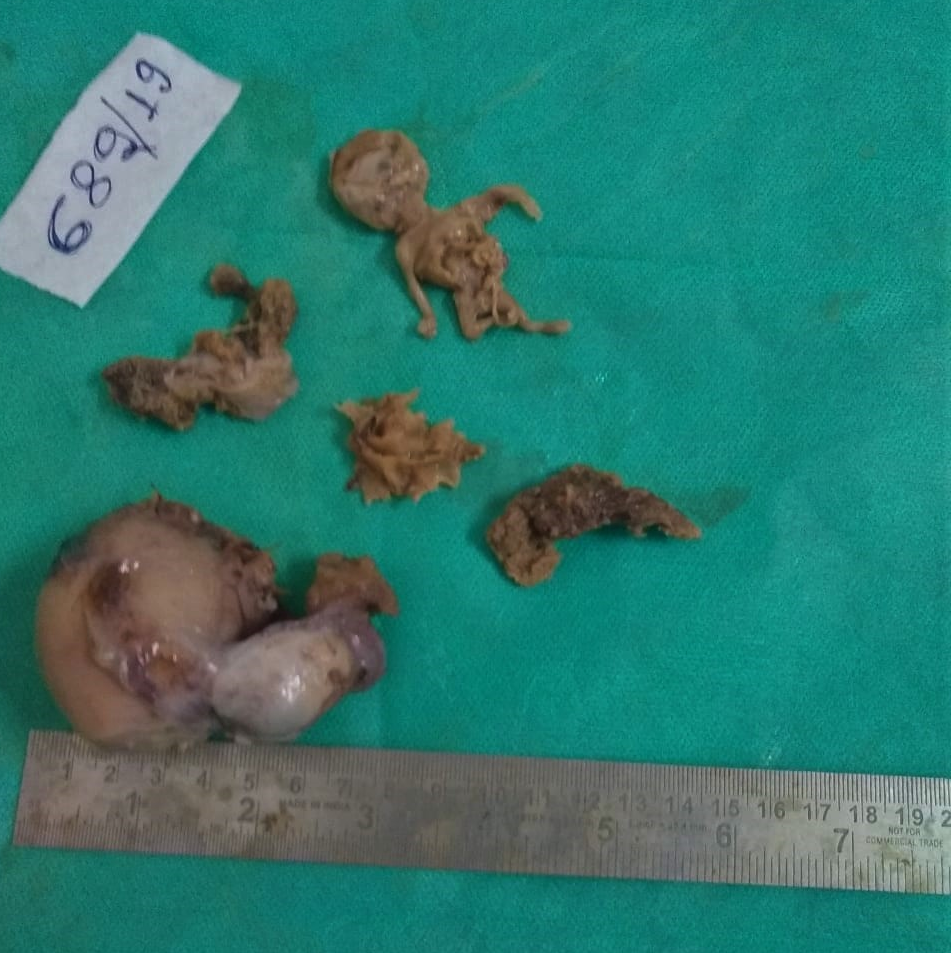 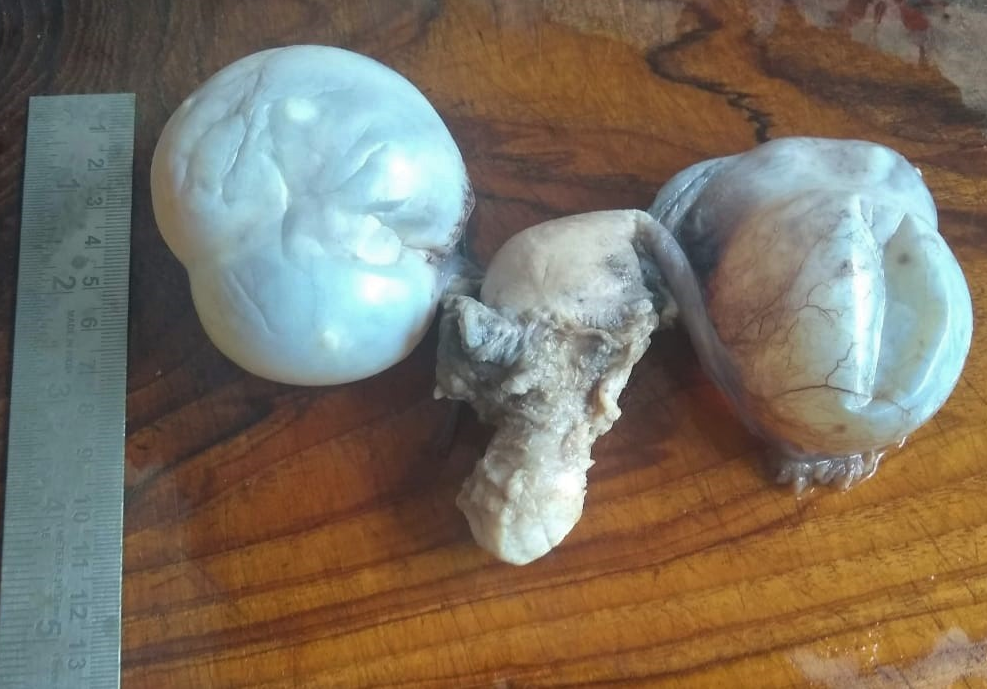 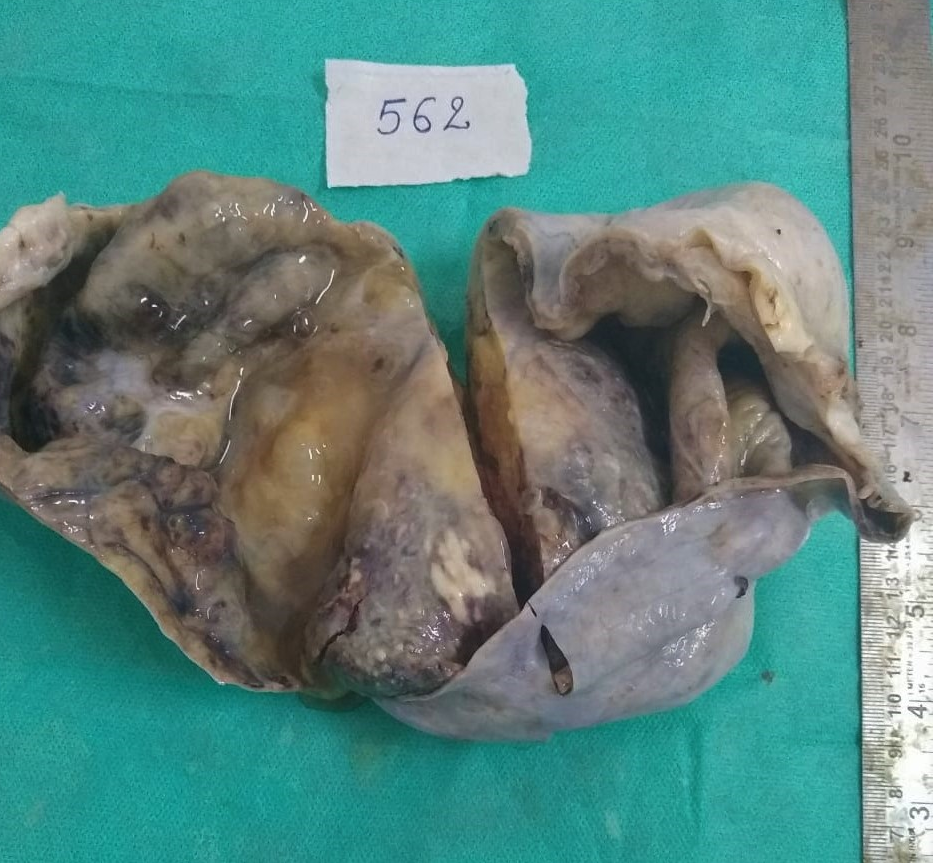 Age wise distribution of patients in the study group

Site of lesion in adnexal mass

Correlation of age with histopathological lesion of adnexal masses

Distribution of cases according to clinical presentation

Categorization of ovarian masses according to histopathology

Adnexal mass is a lesion arising from the ovary, fallopian tube or the surrounding connective tissue. It is a fairly common gynecological problem with a prevalence of 0.17% to 5.9% in asymptomatic females and 7.1% to 12% in symptomatic females.6 In the reproductive age group ectopic pregnancy, benign neoplasms, endometriotic cyst and tubo ovarian abscess are common whereas malignancy is rare. In post menopausal women with adnexal masses both primary and secondary neoplasms of ovary must be considered along with leiomyoma and broad ligament fibroid. Ovarian malignancy carries the worst prognosis amongst all gynecological malignancies and it becomes imperative to diagnose it as early as possible.

Out of the 110 cases in our study, incidence of ectopic pregnancy was seen in 15.45%. Other non-neoplastic lesions were endometriotic cyst and tuboovarian abscess. 77 out of 110 cases presented as ovarian neoplasm, out of which 74% were benign, 6.5% had border line pathology while 19.5% were malignant. The most common benign lesion was Serous cyst adenoma followed by Mucinous cyst adenoma and dermoid cyst. The most common malignant lesion Papillary adenocarcinoma followed by metastatic adenocarcinoma.

Modi et al.14 studied 97 cases of ovarian neoplasms and found 84.5% to be benign, 2.1% border line and 13.4% to be malignant. Surface epithelial tumor was the commonest histological type in both benign and malignant categories followed by germ cell tumours. Their findings are similar to our study.

Kumari et al.15 studied 65 cases of adnexal masses out of which 40 were diagnosed benign on histopathogical examination, 4 were borderline and 21 were labeled as malignant. Among the malignant tumors mucinous cyst adenocarcinoma was the commonest(12.3%) followed by serous cystadenocarcinoma(10.8%). In their study the commonest malignant tumor was surface epithelial in origin a finding which is similar to ours.

Mondal et al17 evaluated histological pattern of 957 ovarian neoplasms over a ten year period. The most common histological type was serous cystadenoma (29.2%) followed by mature teratoma(15.9%) and mucinous cyst adenoma(11.2%). Maor portion of malignant tumors were seen arising from the surface epithelium. Serous cystadenocarcinoma was the commonest malignant tumor in their study.

To conclude, adnexal mass often poses a diagnostic dilemma to the treating physician. Ectopic gestation is often a cause of adnexal mass among patients of reproductive age group. Ovarian neoplasm constitute another major cause of adnexal mass, serous cyst adenoma is the commonest benign lesion seen while serous cyst adenocarcinoma is the commonest malignant ovarian lesion. The limitation of our study is a relatively small sample size of 110 patients and relevant ultrasonographic findings were not available for all patients. Large multi centric studies are required to comment on the histopathological subtypes seen in adnexal masses.