Spectrum of uncommon malignancies in pleural fluid cytology: A study from a tertiary care center in South India

Background: Pleural fluid cytology is a useful diagnostic test to detect metastasis to pleura. Among the metastatic neoplasms to pleural cavity adenocarcinoma is the most common. However there are other neoplasms which rarely infiltrate pleura and produce effusion. The aim of this study is to analyse the spectrum of these unusual malignancies involving pleural fluid with cytomorphology and ancillary studies.

Materials and Methods: This is a retrospective study which includes the pleural fluid samples submitted to the cytology section of our institute between 2015 to 2018. A total of 1510 samples are reviewed. Cases with diagnosis other than adenocarcinoma are selected and their cytomorphological details are analysed with ancillary tests wherever available.

Conclusion: There are certain uncommonly encountered malignancies in pleural fluid. Cytomorphology plays a key role in diagnosing them with certain cases requiring ancillary studies to confirm the diagnosis.

Pleural effusion cytology is one of the first lines of investigation when a neoplastic pleural effusion is suspected. It is a minimally invasive and cost-effective modality. Among the etiologies for exudative pleural effusion, malignancy is the second most common followed by parapneumonic effusions.1 Malignant cells when observed in pleural fluid impart poor prognostic significance to an oncologic patient by defining a higher clinical stage. The most common type of cancer metastasising to pleura and producing effusion is adenocarcinoma with the primary in lung, breast, ovary and gastrointestinal tract. Adenocarcinoma in fluids is relatively easier for a cytopathologist to diagnose. However, there some unusual malignancies in the fluids which can be diagnosed with careful screening and with an insight into the cytomorphological details. Also in certain cases ancillary tests are needed to confirm the diagnosis.

This study is a retrospective one. The pleural effusion samples submitted to cytology section of department of pathology, in our institute between January 2015 to December 2018 for analysis were retrieved from the register. A total of 1510 samples were reviewed. Cases with diagnosis other than adenocarcinoma were selected and their cytomorphological details were analysed. Three smears for each case were available for analysis, two of which were wet fixed and stained by Papanicolaou stain and the other one was dry fixed and stained with MayGrunwald Giemsa stain. Cell block slides and immunohistochemistry (IHC) slides were also reviewed. Cell block was processed using clot method and agar method. IHC was done on cell block using avid in biotin peroxidase method. 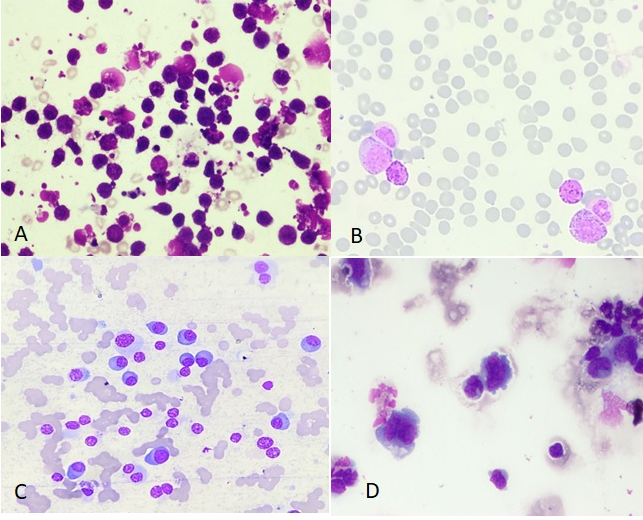 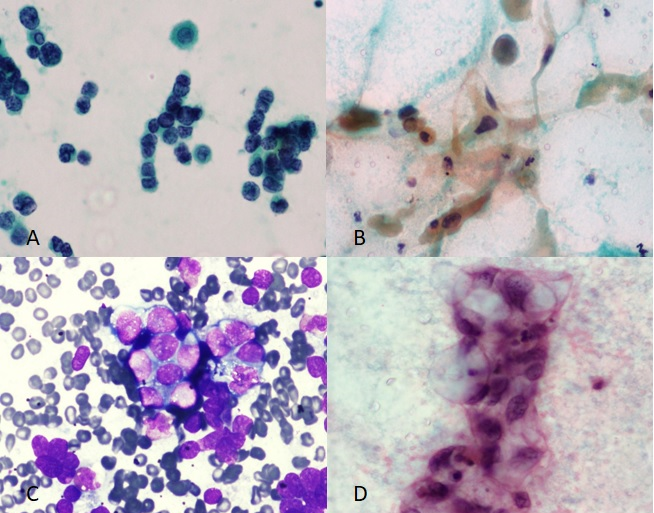 The nonhematolymphoid neoplasms consisted of 2 cases of squamous cell carcinoma (Figure 2B), 1 case of small cell neuroendocrine carcinoma (Figure 2A), 1 case of germ cell tumour (Figure 2D), 4 cases of small round cell tumour and 1 case of granulosa cell tumour of ovary. Of the 4 cases of malignant small round cell tumour, there were 2 cases of rhabdomyosarcoma, 1 case of wilm’s tumour and Ewing sarcoma (Figure 2C). The case of ewing sarcoma had classic biphasic population of tumour cells, the larger ones with cytoplasmic vacuolations and the smaller darker cells in the fluid smear. However rosette formation was not observed. In the case of Wilms tumour, the small round cells were of blastemal nature without epithelial component. Loosely aggregated population of small round blue cells were observed in smears of rhabdomyosarcoma. Both the cases of squamous cell carcinoma had keratinising squamous cells and atypical squames in the smears. In the smear showing infiltration by small cell carcinoma the tumour cells were arranged in small clusters and as individual cells. Tumour cells were 2-3 times the size of small lymphocytes and had fine granular chromatin with nuclear moulding. We had a two year old girl who presented with a ovarian mass and pleural effusion with elevated AFP levels. The pleural fluid smears showed infiltration by tumour cells which are arranged in loose clusters having vesicular nuclei and abundant vacuolated cytoplasm. Histopathology of ovarian mass was diagnosed as germ cell tumour – Yolk sac type. Correlating cytomorphology with elevated serum AFP levels the pleural fluid cytology was reported as positive with germ cell tumour infiltration.

We also had a rare case of granulosa cell tumour (Juvenile type) of ovary in 25 years old female infiltrating the pleural cavity where tumour cells were exhibiting focal follicular pattern of arrangement with moderate amount of cytoplasm and round hyperchromatic nuclei. IHC on cell block was done and tumour cells were immunoreactive for inhibin, calretinin, CD56, CD 99 and immunonegative for CK, EMA confirming the diagnosis.

Pleural effusions are a frequently encountered manifestation of metastatic disease and can occur in 15% of the patients with cancer.2 Malignant pleural effusions are often the initial manifestation of cancer.3 The most common histologic type of cancer to produce metastasis is adenocarcinoma and the primary is in lung, breast, gastrointestinal tract and ovary.4, 5, 6, 7 A variety of other cancers also can cause pleural effusion but their occurrence is unusual. In this study the most common unusual cause of pleural effusion is Nonhodgkin lymphoma which constitutes (22/468) 4.7% of total malignant samples whereas in the study by Aswathi et al NHL contributed to 12.2% of MPE.8 Pleural effusion is a relatively common finding in patients with Non-Hodgkin lymphoma with a frequency of up to 20%.9 The various mechanisms for the formation of pleural effusion includes lymphomatous infiltration of pleura which is the most common followed by lymphatic obstruction due to infiltration of pulmonary and mediastinal lymphnodes and obstruction of thoracic ducts.10, 11 As described by Gupta et al. in their audit the most important aspects of cytology of NHL and leukemia was that the neoplastic cells did not exhibit genuine attachment to each other and there is massive necrosis/karyorrhexis which is never seen in carcinomas.12 Also we observed the presence of lymphoglandular bodies in the background in such cases in our study.

Cakir et al. in their study had observed that some large cell lymphomas may have more abundant cytoplasm and needs to be distinguished from poorly differentiated carcinoma and melanoma.13 This diagnostic dilemma is encountered when ALCL infiltrates the serous cavities as the lymphoma cells are large having lobated nucleus and abundant cytoplasm resembling carcinoma or melanoma cells. We had a case of ALK negative ALCL in pleural fluid cytology where the diagnosis was confirmed with the support of IHC on cell block of the fluid.

In our study we have two cases of positive pleural fluid cytology with chronic myeloid leukemia infiltration. One of the cases had blast crisis and the other showed all stages of myeloid precursors with increased blasts. Pleural effusion in CML patients is a rare occurrence and is poorly understood.14 The possible mechanisms of exudative pleural effusion in CML patients include leukemic infiltration into the pleura, extra-medullary hematopoiesis, non malignant causes and drugs.2

Malignant myelomatous pleural effusions are very rare and occur in less than 1% of the cases of multiple myeloma.15 In multiple myeloma cases pleural effusion usually occurs due to concurrent disease process or coexisting illness such as heart failure, amyloidosis, pulmonary embolism etc and rarely due to myeloma cells infiltration. Our case was an elderly female who presented with pleural effusion and paravertebral mass. Pleural fluid smears revealed plasma cells with mature and immature morphology. IHC was done on cell block of pleural fluid which revealed immunoreactivity to CD138 and kappa restriction and confirmed as myelomatous infiltration.16 This case highlights the significance of ancillary studies like immunohistochemistry which can be done on the cell block of the fluid sample to diagnose the uncommon infiltrations.

Exudative pleural effusion due to malignant small round cell tumour infiltration is another unusual event. We have four cases of pleural fluid positive for small round cell tumour infiltration. One of the cases is Wilms tumour of kidney, other case is Ewing sarcoma of bone and the other two cases are rhabdomyosarcoma of soft tissue and uterus. These are some common pediatric tumours which can have pleural effusion. In a study by Wong et al. where they analysed serous effusion cytology in a large pediatric cohort they reported eight cases of neuroblastoma, five cases of wilms tumour and two cases of Ewing sarcoma.17

The single case of pleural fluid cytology with neuroendocrine carcinoma (small cell type) infiltration observed in this study had classic cytomorphological features which includes small cells with scant cytoplasm, hyperchromatic nuclei and absence of nucleoli. There are also short chains of flattened tumour cells resembling pile of coins. The small cells in fluid can at times be mistaken for inflammatory cells or can be confused with other small round cell tumour.18 Ancillary tests like IHC can be done to confirm the diagnosis in such cases.

In this series we had a very rare and uncommon case of juvenile granulosa cell tumour of ovary in a 25 years old female patient infiltrating pleural cavity. This was not been previously described in literature.19

There are malignancies other than adenocarcinoma which can infiltrate pleural cavity and present with effusions but their occurrence is unusual. Cytomorphological features play a significant role in detecting these uncommon malignancies in pleural fluid. However in certain rare cases, clinical history and ancillary studies help in confirming the diagnosis.

WW Johnston The malignant pleural effusion. A review of cytopathologic diagnoses of 584 specimens from 472 consecutive patientsCancer19855649059