Aim: To study the spectrum, prevlance and frequency of various types of granulomatous skin diseases according to the age and sex of the patient.

Materials and Methods: A cross-sectional type of observational study was carried out in the department of pathology, Rohilkhand medical college and hospital, Bareilly, Uttar Pradesh for the duration of 12 months (November 2018-October 2019). Punch biopsies received were fixed, grossed and processed, with the standard methods and were stained with hematoxylin and Eosin stain. All these biopsies were examined under the microscope and the slides in which granulomatous skin lesions were seen were selected for the study. Special stains were used wherever required.

Results: Out of total 138 cases maximum number of patients belong to the age group of 21-40 years, with male preponderance. Infectious causes were the most common pathology leading to granulomatous skin lesions, with leprosy as the most common etiology.

Conclusion: Leprosy is the leading cause of granulomatous skin lesions in this study. Skin biopsies are an integral part of evaluating cutaneous granulomas. Histopathology along with special stains are the gold standard in reaching exact etiology for a final diagnosis.

Cutaneous granulomas comprise a wide spectrum of diseases that are commonly encountered in dermatology clinics and pose considerable amount of diagnostic dilemma to the dermatologist and the histopathologist both. Cutaneous granulomatosis is a heterogenous group of disease which is characterized by an inflammatory reaction in the skin, triggered by a wide variety of stimuli such as infections, foreign bodies, malignancy, metabolites and chemicals.1 The distribution of granulomatous inflammation varies widely with geographical location and dependend on various other factors, like climatic conditions, socio economic status, cultural variations, education, availability of heath care facilities.2 Skin biopsies are an integral part of evaluating cutaneous granulomatosis and correlation with clinical findings and special stains can help in approaching the diagnosis.3

A cross-sectional type of observational study was carried out in the department of pathology of a tertiary medical institute for the duration of 12 months. The clinical findings and other related information were obtained from the patients aided by the requisition forms of the biopsies received. Punch biopsies of the lesions including a bit of normal tissue received were fixed in 10% neutral buffered formalin, grossed and processed, with the standard methods followed by staining with hematoxylin and eosin stain. All the biopsies were examined under the microscope and the slides in which granulomatous lesions were observed were selected for the study. Special stains like modified Ziehl-Neelson (ZN), Fite Faraco (FF) were used wherever required to demonstrate the acid fast bacilli. Based on the clinical and histomorphological findings cases of granulomatous skin lesions were analysed.

A total of 138 cases were included in the study. Microscopic findings were observed, correlated and the results obtained were tabulated. The age distribution of the 138 cases is given in (Figure 1). Majority of cases belonged to the age group of 21-40 years, followed by 41-60 years. Male preponderance was seen in our study with M:E ratio 1.9:1 (Figure 2). In the present study males were commonly affected by infectious pathology like leprosy and females were more commonly affected by non-infectious pathology like granuloma annulare and tricoepithelioma. Histopathological diagnosis was further divided into three broad categories, infectious, non-infectious and miscellaneous. The Infectious category constituted 130 cases (86.96%). Infectious granulomas comprised of leprosy and tuberculosis. The non-infectious etiology included only 2 cases (1.45%) comprising one case each of granuloma annulare and annular elastolytic giant cell granuloma. 6 cases (4.35%) which were not kept in the above categories were included in the miscellaneous category. It was observed that leprosy was the most common cause of infectious granulomatous pathology in our study (117/130) cases with indeterminate leprosy as the most common subtype- 42 cases (32.31%). Leprosy was most commonly seen in the age group of 21-40 years. Out of the total 138 cases, 26 cases (18.84%) showed clinic-histopathological concordance. Among 138 cases acid fast bacilli (AFB) was successfully demonstrable in 44 cases by special stains like Fite Faraco and modified Ziehl Neelson stains.

Showing the age distribution of patients (in years) 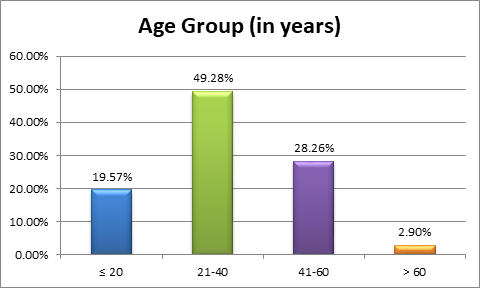 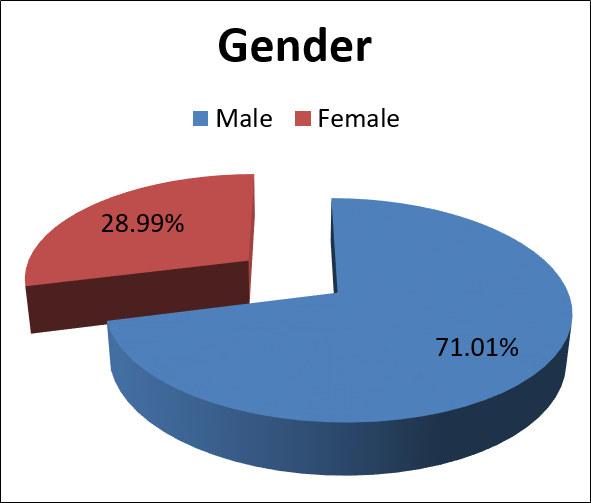 Granulomatous diseases of skin comprise of a big family sharing the common histological denominator of granuloma genesis.4 An identical histologic picture is produced by several causes and conversely a single cause may produce varied histologic pattern.5 Out of the total 138 cases included in the present study age and sex distribution revealed that majority of cases belonged to the age group of 21-40 years, 68 (49.28%) cases followed by 41-60 years, 39 (28.26%) cases. Similar findings were seen in the study by Rathod and Parmar having the most common age group as 21-40 years of age (73.75%) for presentation of the disease.6 Also, similar findings were reported with Permi et al and Potekar et al.7, 8 A contrasting result was seen with Queiros et al who had 51-60 years as the most common age group for presentation.9 Our study showed a male preponderance 98 (71.01%) cases, whereas by females were 40(28.99%) cases with M:E ratio of 1.9:1. The youngest patient in our study was a 8 year old boy and eldest 67 year male. Similar findings were reported by Rajbhandari et al and Potekar et al with a higher rate in males preponderance.3, 8 However the findings were in contrasting with those of Zafar et al and Kumbar et al which showed female preponderance (57.3%) and (52.77%) cases respectively.10, 11

In the present study the spectrum showed that infectious causes are the commonest etiology of granulomtous pathology 130(86.96%) cases out of 138 cases were affected followed by non-infectious causes 2(1.45%) patients. Miscellaneous causes were 6(4.35%). The findings is concordant with the finding of Bal et al. who also observed infectious dermatitis as the commonest cause.12 The present study is also concordant with the study by Gautam et al and Ahmed et al. in which majority of the patients were of infectious granuloma.13, 14 Queiro’s et al. observed non-infectious type of lesions to be 4 times more common than infectious lesions.9 This variation may be attributed to the geographical, cultural and climatic variations. Infectious are more commonly seen in developing countries then in developed countries.

The present study showed that leprosy (117/130 cases) was the most common type of infectious cause of granulomatous dermatosis, with indeterminate leprosy as the commonest subtype 42(32.31%) representing an early form. These findings are similar to the study onducted by Sharma and Rai which showed leprosy as the most common infectious disease and indeterminate leprosy as most common subtype of leprosy.15 The finding are however discordant with those of Ahmed et al. in which borderline tuberculoid leprosy 22.86% was the commonest subtype of leprosy and Potekar et al. who also had borderline tuberculoid leprosy as the commonest cause(25.37%).14, 8 After leprosy the next most common cause among infectious etiology is cutaneous tuberculosis (13/130 cases), with lupus vulgaris being the commonest subtype 11(8.33%). The findings are concordant with those of Potekar et al in which lupus vulgaris constituted 2(2.98%) cases as commonest subtype.8 The present study showed that out of total 138 cases, 26(18.84%) showed concordance between clinical and histopathological diagnosis, 98(71.01%) cases showed partial consistency and 14(10.14%) cases were discordant. Vaishali R Makwana et al. showed that out of 105 cases, 69(65.7%) were concordant, 16(15.23%) cases were discordant and 20(19.04%) cases were undecided.16 Rajbhandari et al also showed 63% clinicohistopathological correlation (69/109 cases).3 Similar other studies by Gautam et al., Permi et al. showed 61.3% and 92% concordance rates respectively.13, 7

Infections are the most important cause of granulomatous skin diseases with eprosy as the most common etiology. Though many health programmes are running and few are under development which work to control and manage the spread of leprosy and provide proper treatment to the affected individuals, but still leprosy is persisting and a leading cause of infection.

Histopathology plays an important role in classifying and subtyping of various granulomatous skin diseases. Effective examination of skin biopsy sections, along with proper clinical information definitely helps in reaching at a definite diagnosis.

Role of special stains can’t be ignored, using them judiciously definitely upports the diagnosis and helps in arriving at appropriate diagnosis whenever difficulties are encountered on histopathology alone. Conducting such studies can definitely help the pathologists and dermatologists to reach a final diagnosis, and with the proper and effective treatment, disease burden in the society can be reduced and findings may surely help health care programmes running in our region related to such diseases.