Chaudhari, Gandhi, and Shah: Acinar cell cystadenoma of pancreas: A case report and review of literature

Acinar cell cystadenoma of pancreas: A case report and review of literature:

Acinar Cell Cystadenoma (ACA) of pancreas is recently recognized pancreatic lesion by the World Health Organization (WHO) in 2010. It is a very rare benign cystic neoplasm of pancreas that only few cases (<100) have been reported in literature. Because of rare occurrence, the pathogenesity is not properly understood. Histologically it is composed of variably sized cystic spaces lined by mature acinar cells, admixed with normal pancreatic parenchyma. Here we present the histopathology of a case of acinar cell cystadenoma with review of literature.

A 21 year old male presented to Gastrosurgery OPD of VS General Hospital with complains of abdominal pain since one and half months. Abdominal examination reveals tenderness in left hypochondriac region. Abdominal ultrasound examination revealed a cystic tumor involving head and uncinate process of pancreas. Patient was operated for Whipple procedure and specimen was sent for histopathological examination.

Specimen of Whipple procedure was received in seven parts. Largest one consisted of pancreatic head with part of stomach and duodenum, total measuring 35x5 cm in largest dimensions. The part of pancreas was measuring 4x3.5x3 cm. On cut section of pancreas area with multiple small cysts was identified measuring 3x3 cm in diameter.(Figure 1) The other six portions were consisted of a gallbladder and lymphnodes. 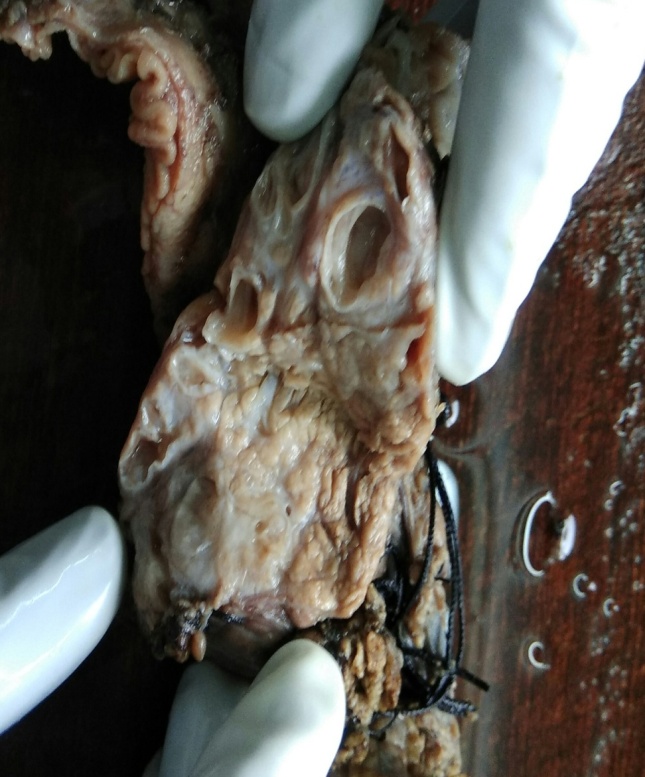 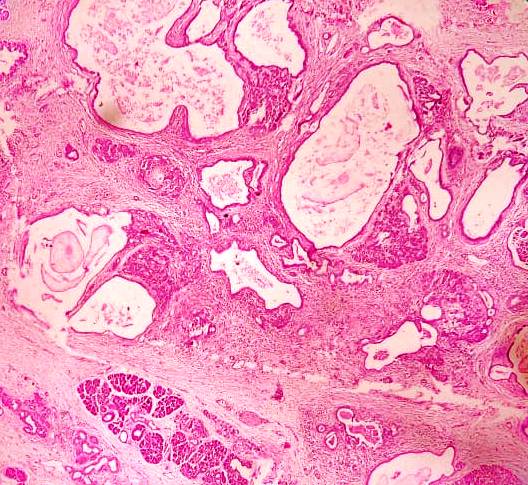 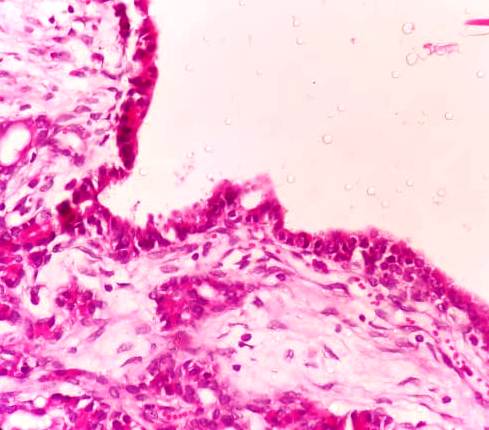 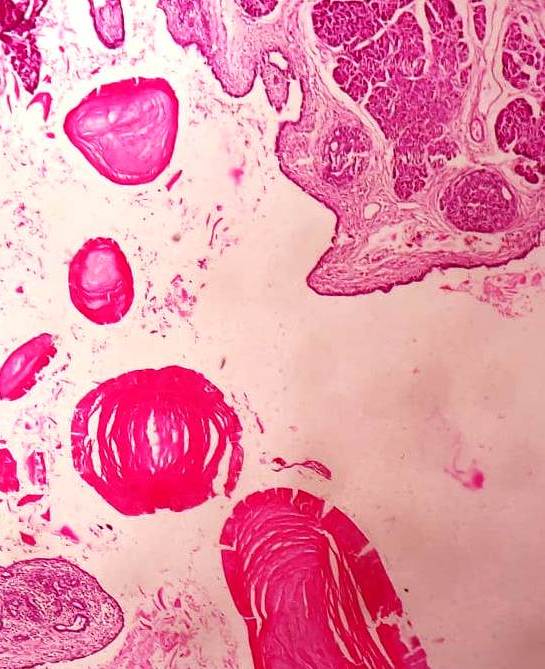 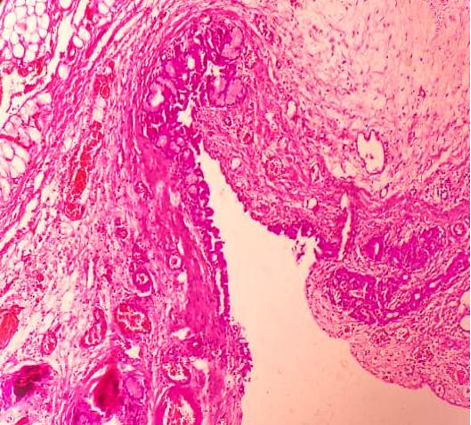 Conventionally it was believed that acinar neoplasms in the pancreas are always malignant.5 Albores-Saavedra in 2002, first reported a previously undescribed pancreatic cyst with acinar cell differentiation of the lining epithelium without cellular atypia and malignant features, as acinar cell cystadenoma in contrast with ac inar cell cystadenocarcinoma.6 There are only few case reports of ACA in the literature.7, 6 Age of presentation is 9-71 years (mean-42) with slight female predominance.10, 9, 8, 7 Acinar cell cystadenomas clinically present as abdominal pain, discomfort or jaundice and sometimes found incidentally. Most cases involve the head of the pancreas.7 Grossly they are multiple and well circumscribed.7 There cut surface shows multi ple variable sized small cysts. Histologically acinar cell cystadenomas are composed of cysts lined by single or several cell layer s of cuboidal cells with round, basally located nuclei and eosinophilic, periodic acid stain (PAS) positive granules in apical region of cytoplasm. Mitoses are rarely observed.9, 7 Immunohistochemistry of ACA is similar to normal acinar cells. It is positive for pancreatic enzymes (Chymotrypsin, Trypsin, and Lipase) and epithelial markers such as AE1, AE3, and CAM 5.2. Unlike non neoplastic acinar cells, cells of acinar cell cystadenoma are CK 7 positive.7,11,12 MIB index is less than 1%.7

The etiopathogenesis of acinar cell cystadenoma is not established,but now based on results of immunohistochemistry it is assumed that acinar metaplasia could be the main pathology.9 Polyclonality of the X chromosome suggests that ACAs are benign on- neoplastic ballooning degeneration of acinar epithelium.11 In contrast, Khor et al have suggested that ACAs are neoplastic because there is augmentat ion in number of specific genes.12 No cases are reported with recurrence or malignant transformation of acinar cell cystadenoma in literature.

M Kosmahl U Pauser K Peter Cystic neoplasms of the pancreas and tumor like lesion swith cystic features: a review of 418 cases and classification proposalVirchows Arch20044451681786