Solid lesions of pancreas a diagnostic dilemma: Utility of histopathology:

Materials and Methods: A descriptive study done on all resections (PPPD and Frey excision) of pancreas for a period 18 months. A total of 30 cases were included with adequate clinical and radiological features. Formalin fixed paraffin embedded sections were studied and analysed for USG findings, signs and symptoms, associated co morbidities and histological factors.

Results: Females were more affected than males (1.7:1). Solid lesions presented in individuals as young as 21years to older individuals of 71yrs. The solid lesions included inflammatory lesions (such as acute and chronic pancreatitis) and neoplastic lesions. Most common clinical presentation was jaundice and vague abdominal pain accounting for 67.8 percent of study population. The histomorphological spectrum of solid lesions included 14 cases of inflammatory lesions and 16 cases of neoplastic lesion (Table 1). Among the 16 cases neoplastic lesion 5 cases had coexisting tropical pancreatitis. USG examination showed a sensitivity of 53.85%, specificity of 38.46%, positive predictive value of 46.67% and negative predictive value of 45.45% and accuracy of 46.15% for USG examination. Histomorphological features of pancreatitis were studied and most common finding was calcification (100%) present as both microscopic concretions or macroscopic calculi, followed by fatty changes (77%) and fibrosis (72%).

Conclusion: Solid lesions of pancreas still pose diagnostic difficulty for clinician. USG has poor predictive value for non-neoplastic lesions. Histopathological examination remains the gold standard for diagnosis. However, emphasis for minimally invasive techniques such as FNAC must be given.

Pancreas is a distinct organ due to its varied function and physiology. An organ formed from two separate buds or anlagen which later rotate and fuse.1 The organ with its dual composition and function has myriads of role ; with it comes an array of pathology. Pancreas gained its significance from 18th century with advent of Whipple surgery for pancreatic cancer.2 Around 19th century the endocrine nature of pancreas gained interest with discovery of insulin by Banting.3

Diverse lesions of pancreas include inflammatory and neoplastic i.e., from pancreatitis to adenocarcinoma. These lesions often present as solid mass lesions of pancreas. In the age with advancement in imaging technology, innovation in radiology ; fair assessment of pancreatic lesions had led to decreased number of invasive surgeries. Although the advances in imaging increased the discovery of pancreatic masses, their correct identification as a nonneoplastic process is still difficult.4 Pancreatic pseudotumor do not represent a single entity, but multiple distinct categories of lesions characterised by an enlargement of nonneoplastic character, which clinically resembles a true neoplasm so closely as to often be mistaken for such.5 Hence the ideal diagnostic (gold standard) test remain histopathological examination.

A descriptive study done on all resections (PPPD and Frey excision) of pancreas from a period of August 2016 to January 2018 in a tertiary care centre in south India. A total of 30 cases were included. Study was commenced after approval from institutional ethics and research committee. Clinical and radiological features were collected from the patients after appropriate consent. Formalin fixed paraffin embedded sections were cut into 5-micron meter thick section and stained with haematoxylin and eosin. Tumours were classified according to WHO classification appropriate TNM staging was done according to CAP protocol. IHC was done in relevant cases. All data were entered in Microsoft excel and analysed by SPSS software.

Thirty cases of solid lesions of pancreas were studied over a period of 18 months. Demographic factors such as age, sex was included and in our study, females were more affected than males (1.7:1). Solid lesions presented in individuals as young as 21 years to older individuals of 71yrs.

The solid lesions included inflammatory lesions (such as acute and chronic pancreatitis) and neoplastic lesions. Age wise distribution showed difference with respect to lesions. The mean age of inflammatory lesions were 48years and for neoplastic lesions were 62 years. Most common clinical presentation was jaundice and vague abdominal pain accounting for 67.8 percent of study population. Only a single case presented as malena with absence of other symptoms and signs.

Histomorphological features of pancreatitis were studied and most common finding was calcification (100%) present as both microscopic concretions or macroscopic calculi, followed by fatty changes (77%) and fibrosis (72%). Least common macroscopic finding was pseudocyst formation and fat necrosis (Figure 4) accounting for 23%. Microscopic examination showed fatty changes, fibrosis, acinar atrophy and mild chronic inflammation in all cases. Autoimmune pan creatitis was not diagnosed in our study. Only a single case of acute pancreatitis was seen, hence their feature was not statistically significant.

Among the neoplastic lesions of pancreas, most common pathology in our study was pancreatic adeno carcinoma (12/16), followed by neuroendocrine tumour (2/16). Pancreatic adenocarcinoma showed a mean diameter of 39 mm. Most of the lesions were moderately differentiated (91.7%) and 66.7% showed perineural invasion. Microvascular invasion was absent in all cases. Among the 12 cases of adenocarcinoma, 5 cases (41.67%) showed coexisting chronic pancreatitis thereby showing a positive statistical correlation.

Histomorphological features of neoplastic lesions is addressed in the table below 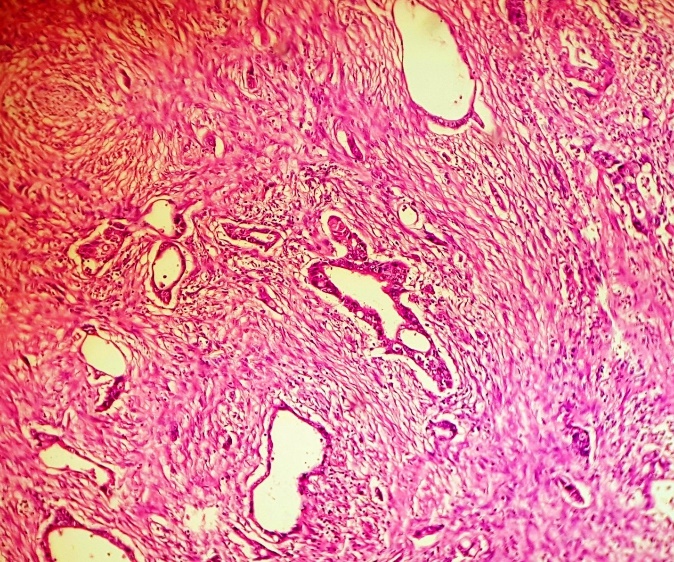 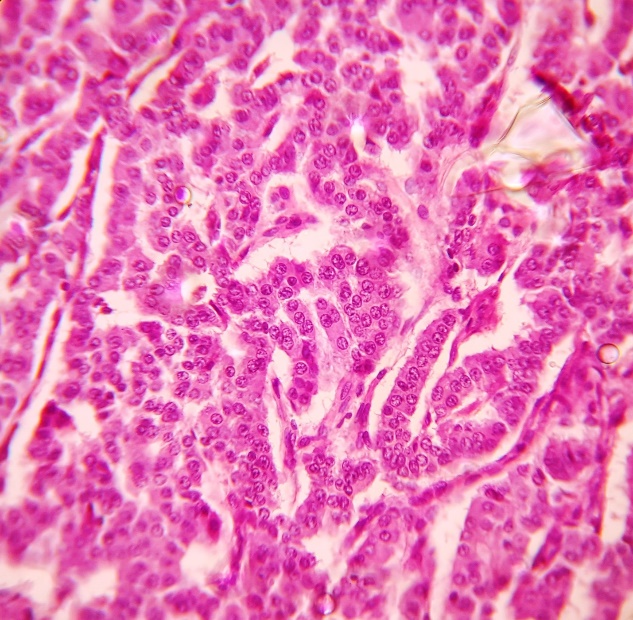 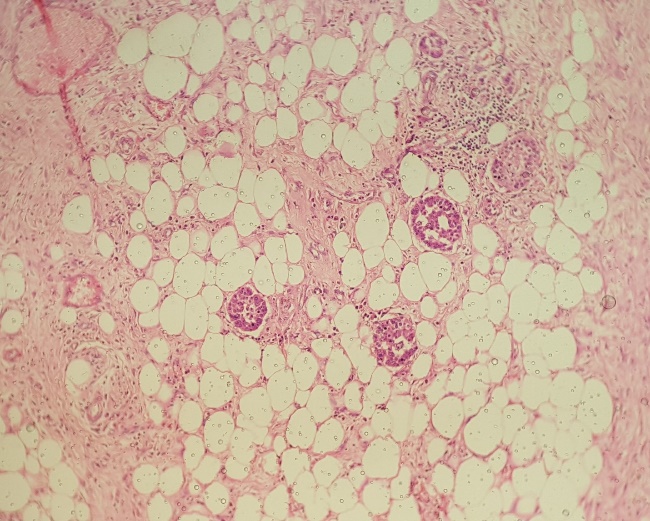 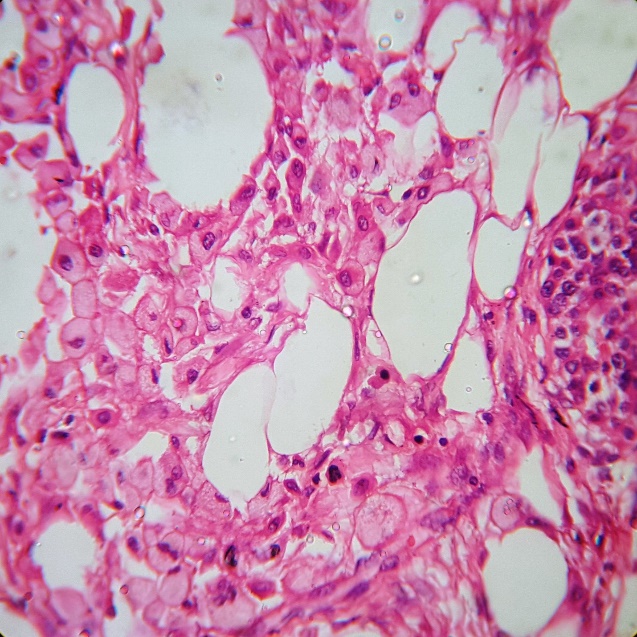 Non neoplastic solid mass lesions of pancreas often pose unique diagnostic challenge. Benign lesions often present as solid mass, imaging characteristics of which can be nonspecific and or misleading. It is important to recognise key cytomorphological features to avoid pitfalls and help distinguishing these lesions. 6

In our study of solid lesions of pancreas females were more affected as compared to Tingsted et al,7 Thapa et al8 and Raju et al.9 Most studies showed male preponderance.

Life style factors such as alcohol consumption and smoking and diet were not included in our variable. Thirty eight percent age of population had history of diabetes mellitus. These thirty eight percent of cases were solid lesions of pancreatic adenocarcinoma with co-existing chronic pancreatitis suggesting an increased of developing pancreatic cancer in long standing comorbidities.11, 10

Clinical presentation of the lesions was comparable with Yadav and Kenji et al,12 which had jaundice and abdominal pain as the most common clinical symptom. These cases had a shorter duration of symptoms which can be attributed to the location of involvement in pancreatic head. This has been illustrated and was comparable with Era B of Salami et al.13

Chronic pancreatitis is a chronic inflammatory disease of exocrine pancreas which in comparison with adenocarcinoma has a better prognosis. Often as a part of pre operative diagnosis, imaging analysis of these lesions is done. However the sensitivity and specificity of these modalities has been a question. In our study we observed that the imaging modalities were excellent in detecting neoplastic lesions however often had poor predictive value for non-neoplastic lesion and its delineation from neoplasm (Table 2). This lead to inadvertent misdiagnoses and improper management of the patients. This was comparable by Y. Issa et al.14

In our study 13/13 case of chronic pancreatitis were of tropical pancreatitis type characterised by gross calculi, fibrosis and fatty change. Balakrishnan et al15 and Augustine et al16 had done studies on tropical pancreatitis in south India and found association of cassava intake with tropical pancreatitis. Their study also showed macroscopic features such a calculi formation, fibrosis and fatty change which was corroborating with our study. Microscopic maintenance of lobular pattern even in advanced cases was normal. Preservation of islet and atrophy of acini were found in all cases. However, ductular transformation of acini in the formation of tubular complexes closely packed clusters were seen in single case. Etemadi et al17 has similar findings of tubular complexes and mild chronic inflammation as seen in our study.

Among the neoplastic lesion pancreatic adenocarcinoma was most common, and worldwide pancreatic ductal carcinoma represents the fourth common cause of death i.e., cancer with a survival rate of less than 1-2%. In our study 41.67 percentage of adenocarcinoma had co existing chronic pancreatitis. Several pathogenic mechanisms have been implicated in the development of pancreatic adenocarcinoma. Among them cationic trypsinogen gene which is present in hereditary chronic pancreatitis has been implicated. In our setup in southern India, tropical pancreatitis is in higher incidence, aetiology of which is still unknown. Irrespective of the underlying aetiology, the continuum of progressive parenchymal destruction, dedifferentiation of acinar into tubular complex, immune cell infiltration and inflammation has known to cause neoplastic transformation. In our study 41.67 percent of cases showed coexisting pathology suggesting a possible link of oncogenic transformation in chronic pancreatitis.

Solid mass lesions of pancreas often pose a unique diagnostic challenge. A variety of non-neoplastic conditions may form pancreatic masses that mimic carcinoma. Approximately 5-10% of pancreatectomies performed with clinical diagnoses of pancreatic cancer prove to be pseudotumor on microscopic examination. Imaging advances has not helped in replacing histopathology as gold standard for proper delineation of nature of these lesions. However, emphasis for minimally invasive techniques such as FNAC must be given in the upcoming era.

A Salami T Obaid A R Joshi Trends in the clinical presentation, treatment, and survival for pancreatic adenocarcinomaAm J Surg20192171103107