A rare case of Mucinous, tubular and spindle cell carcinoma of kidney and Histomorphological study of renal cell tumours:

Introduction: Cancers of the kidney amount to 2% of total human cancer burden, with approximately 1,90,000 new cases diagnosed each year. Prognostic markers for RCC, such as tumor stage, grade, necrosis or microvascular invasion are important in determining appropriate follow up and selecting patients for adjuvant therapy.

Aim: Aim of the study is to analyze the clinical and histopathological variables in Renal Cell Carcinoma and establish possible correlations between them, if any. The study also highlights a rare case of mucinous tubular and spindle cell carcinoma of the kidney.

Materials and Methods: This is a retrospective study involving 52 cases of Renal Cell tumors diagnosed, during period of 2 years (2015-2016)

Renal Cell Carcinoma accounts for 2% of total human cancer burden.1 The peak incidence is in sixth and seventh decades of life. The male to female ratio is 1.6:1. Etiological factors include tobacco smoking and lifestyle factors. RCC is seen in a variety of inherited syndromes.2

In our study, we aimed to evaluate the clinical and pathological variables, such as age, sex, histologic subtype, tumour grade, pT classification, tumour necrosis and microvascular invasion, in a series of consecutive patients with RCC.

This is a retrospective study done on cases of Renal cell Carcinomas, diagnosed in the Pathology Department of KIMS hospital during a period of 2 years (2015-2016). Surgical specimens from patients who underwent radical or partial nephrectomy specimens, provided the tissue samples. These were formalin fixed, paraffin embedded followed by standard hematoxylin-eosin staining.

A 60 year old male presented to the urology department with an incidentally detected right renal mass. MRI abdomen and pelvis showed a mass arising from the lower pole of right kidney, which was hypointense on DW, with significant restriction on ADC map.

Laparoscopic right radical nephrectomy was done. Grossly the tumour was grey white and lobulated .Microscopy showed cuboidal cells arranged in cords and tubules with spherical to oval nuclei and small nucleoli (Figure 2, Figure 1). Collection of foamy histiocytes and scattered lymphocytes were seen in between the tumour cells. Many of the areas showed spindling of cells (Figure 3). Alcian blue showed focal positivity for extracellular mucin.(Figure 4)

A diagnosis of Mucinous, tubular and spindle cell carcinoma of the kidney was given.

On Gross examination specimens had a variegated appearance with some showing cystic areas. There were different growth patterns including alveolar, acinar, solid and mixed. Most of them showed capillaries and thin walled blood vessels in the supporting stroma- which is a helpful diagnostic feature. The cytoplasm of the cells is rich in lipids, and glycogen, which dissolved during processing and gave the characteristic clear appearance. Many of the cases also exhibited an eosinophilic cytoplasm. Nuclear pleomorphism was seen, according to the grade of the tumour. One case exhibited sarcomatoid differentiation.

Papillary RCC was found in 4 cases (7.69%). Grossly the tumours were variegated with hemorrhagic and necrotic areas. Papillae contained a delicate fibrovascular core and aggregates of foamy macrophages. Necrosis and hemorrhage were seen. Tumour cells varied from small size with scanty cytoplasm and high NC ratio to larger cells with abundant eosinophilic cytoplasm. Calcific concretions were noted.

Oncocytoma was found in 4 cases (7.69%) of the patients studied. Gross showed tan brown areas with central fibrotic scar in some. Solid compact nests of cells were seen, with strongly eosinophilic granular cytoplasm; Most of the cells showed uniform round nuclei, evenly dispersed chromatin and small nucleoli. Some of the cells showed bizarre enlarged nuclei; but mitoses were rare. Stroma was edematous in some areas.

A proper TNM staging could not be done because of the inconstant clinical data regarding metastasis. So we categorized the patients according to the pT stage and nodal stage 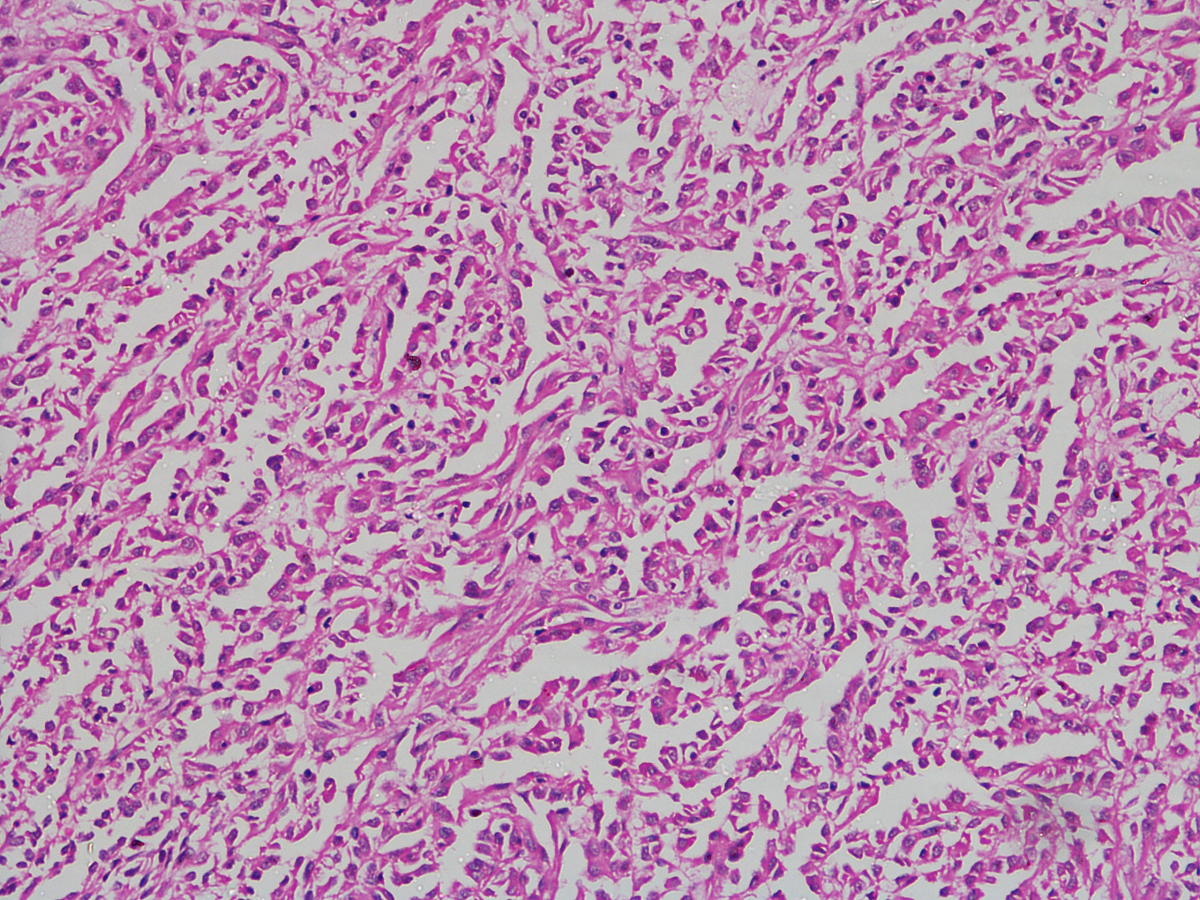 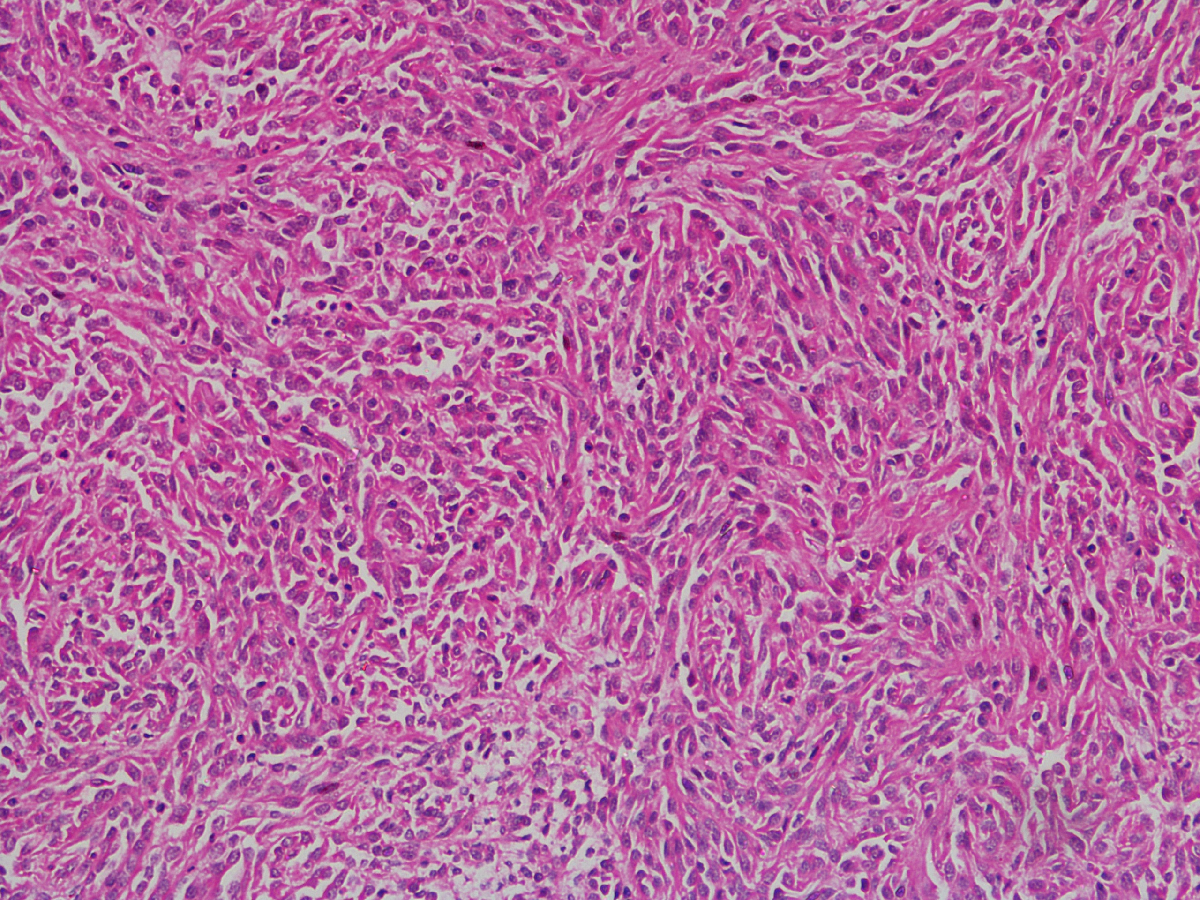 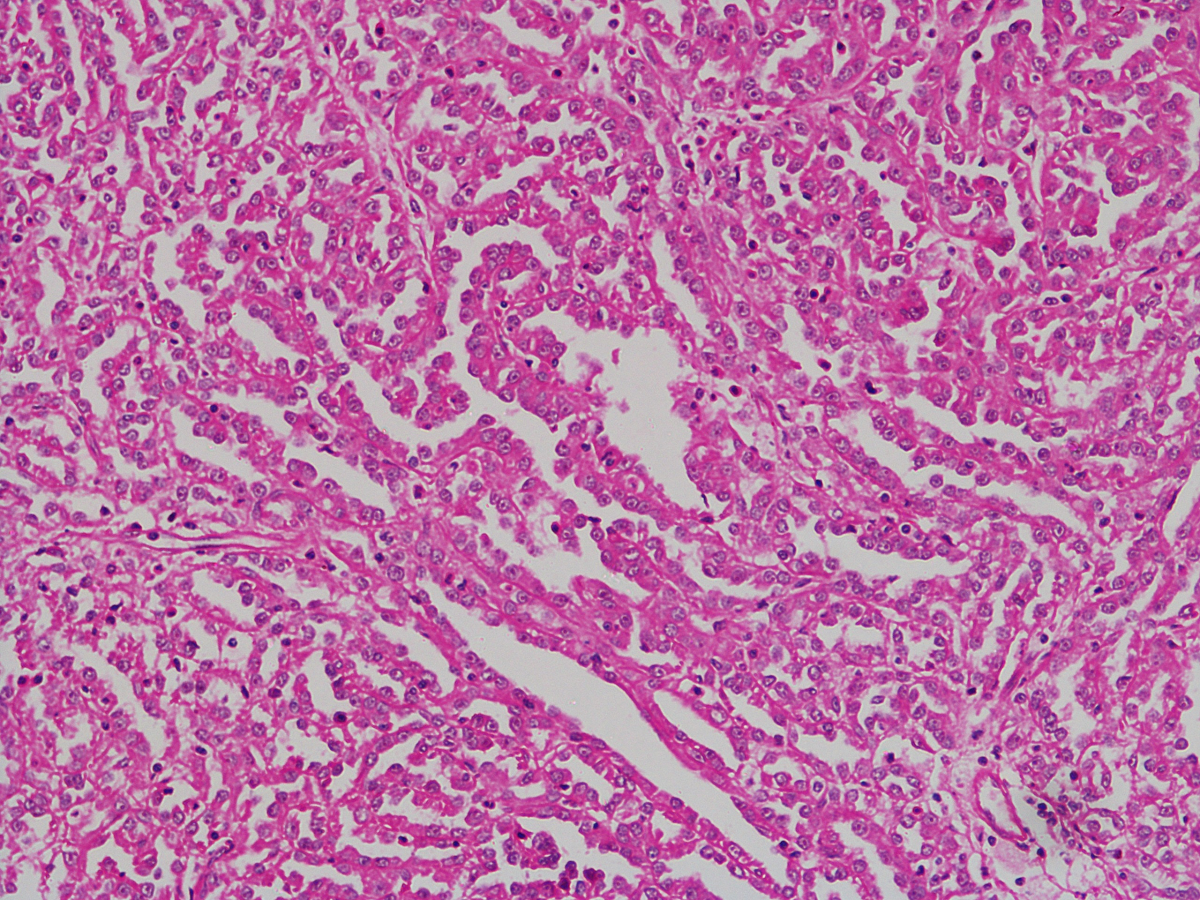 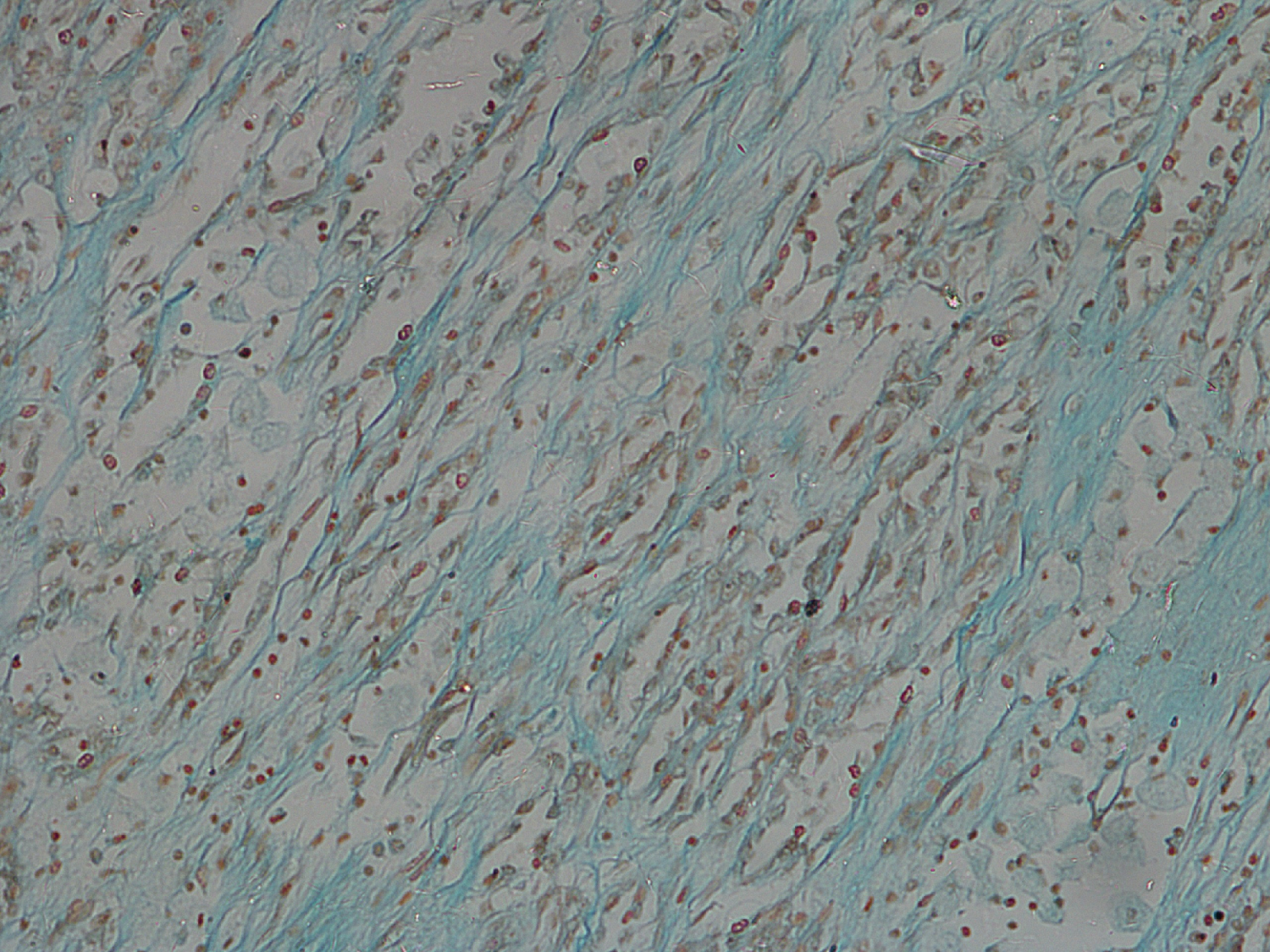 Renal cell carcinoma is the most common malignancy of human kidney. It remains a major source of morbidity and mortality.7 Tumour stage, size, histologic subtypes and nuclear grades are the most important pathologic prognostic indicators for RCC.6

The first parameter considered for pathologic evaluation was the histologic subtype. The main subtype encountered in our case series was Clear cell Carcinoma, followed by Papillary carcinoma. This was similar to other referenced reports and reviews.6 The frequency of Chromophobe RCC was less in our study. Histologic subtyping of RCCs has a significant role in patients’ overall outcome because of their implications in the prognosis and treatment.8 Clear cell carcinomas have a less favourable prognosis than other subtypes like Papillary and Chromophobe RCCs.9

Another factor implicated in the poor outcome is the sarcomatoid dedifferentiation, which was noted in 2 cases in our study. This is also associated with decreased response to immunotherapy treatments.10 Sarcomatoid differentiation is seen in 5% of Renal cell carcinomas and can be observed in any of the subtypes. Renal cell carcinomas with sarcomatoid differentiation has other adverse pathologic features like tumour size,extension into perinephric fat and vessels, hemorrhage and necrosis. There is an increased likelihood of distant metastasis and carcinoma specific deaths.11

There was one case of Mucinous, Tubular and Spindle cell carcinoma, in or study. It is a rare and recently described subtype of RCC. Less than hundred cases have been reported in the literature.12 It shows a female predominance and affects adult population cut surface is usually bulging with tan, grey or pale yellow colour. Foci of hemorrhage or necrosis may be seen.2

Histologically the tumour is characterized by cuboidal cells arranged in cords and tubules with transition to spindle cell areas. Papillary projections protruding into the tubular lumen may be seen as a minor component, as was found in our case. Extracellular mucinous or myxoid matrix are usually abundant.12

A so called “mucin poor” pattern of Mucinous, Tubular and Spindle cell carcinoma has recently been described where there is little or no extracellular mucin appreciable on light microscopy. Alcian blue stain can highlight the scant mucin in the tumour. Our case belonged to the mucin poor category. The tumour cells are usually bland with low nuclear grade. Mitoses and necrosis are uncommon. Stromal changes other than myxoid degeneration that can be seen in MTSRCC are collections of foamy macrophages, lymphocytic infiltrate at the periphery, psammoma bodies and heterotopic bone. MTSRCC in its classic form does not pose a diagnostic problem. But predominance of spindle cells and paucity of mucin can cause diagnostic dilemma.13 When the spindle cells predominate, the most important differential diagnosis is Sarcomatoid RCC, which can be excluded by the lack of pleomorphic nuclei, mitotic activity or necrosis. The prognosis is generally favourable and complete surgical excision is the mainstay of treatment.12

Tumour grading is an important prognostic tool. Fuhrman nuclear grading is based on nuclear characteristics like size, contour and nucleoli.6 Most of the cases in our study belonged to grade 2. There was no difference between the predominant nuclear grade in papillary and clear cell carcinomas. This was not in correlation with other studies, where Papillary carcinomas mostly belonged to grade 3.14 This discrepancy must be because of the fewer number of patients in the Papillary carcinoma group.

In our study, only seven cases showed tumour necrosis. Tumours with coagulative necrosis tend to be associated with a higher grade and advanced tumour stage.15 These results were comparable with those of other studies. Histologic tumour necrosis should be routinely reported because it is an independent predictor of outcome in clear cell and chromophobe RCCs.16

Microvascular invasion is associated with higher risk for the development of metastatic disease and is an independent predictor of disease recurrence.11 This was demonstrated in 5.77% of our cases which was considerably lower when compared to most of the studies. This might be because we were depending on the routine Hemotoxylin & Eosin method instead of immunohistochemistry.

RCCs have characteristic histomorphological features and biologic behaviour. The main histologic subtype encountered in our study was Clear cell Carcinoma. Most of the clear cell carcinomas belonged to nuclear grade 3. We had a case of Mucinous, Tubular and Spindle cell carcinoma which is a rare entity. Our study also showed that tumour necrosis was associated with a higher grade and tumour stage.

S W Fine P Argani A M De Marzo Expanding the histologic spectrum of Mucinous, Tubular and Spindle cell carcinoma: a report of 15 cases and a review of literatureVirchow Arch20054476978983