Sridevi and Jayaganesh: A study of cytology and histopathology correlation of salivary gland neoplasms in a tertiary care hospital

A study of cytology and histopathology correlation of salivary gland neoplasms in a tertiary care hospital:

Materials and Methods: This study was done in Saveetha Medical College, Thandalam in 40 patients. The period of study was from January 201 6 to December 2017. A total of forty cases of salivary gland tumors for which both FNAC and Biopsy were accessible were solely included during this study.

Results: Out of forty patients slight male predominance was noted with male: female ratio of 1.5:1. Most of the tumour were found to be in the parotid gland (31 cases) followed by submandibular gland (6 cases). Out of forty cases, twenty eight were benign and twelve were malignant. Out of twelve malignant cases, nine cases (75%) reported in cytology correlated well with histopathology.

Conclusion: FNAC are often a great tool in reducing the rate of salivary gland surgery by one third of cases and in patients undergoing radical surgery. FNAC helps in coming up with an ideal surgical approach.

Salivary gland is an organ of nonuniformity in cytopathology making marked limitations in cytological diagnosis. Among the head and neck lesions, the incidence of salivary gland lesion is 2 to 6.5%. 3, 2 Salivary gland tumours are not so common and majority of them occur in parotid followed by minor salivary glands.

FNAC is a minimally invasive method which is also safe and reliable. 4 As the major salivary glands are superficially located it is easy to do the FNAC technique.5, 2 The main aspect of FNA of salivary gland lesions is to assist the clinician in patient management. Cytology helps in assessing whether the process is salivary or non salivary and if neoplastic whether it is benign or malignant.7, 6

Clinicopathological correlation is mandatory for a preoperative assessment for patient management to utilize the utmost benefits of cytological diagnosis. The histological complexity and morphological variability is reflected in cytological material.9, 8 FNA reduces the rate of salivary gland surgery by more than 50 %. It aids in counseling of patients before surgery. 1

This study was done in Saveetha Medical College, Thandalam, in the department of pathology in 40 cases during a period of two years from January 2016 to Dec ember 2017. For all the cases both FNAC and Biopsy were available. In every case sex, site of lesion, and clinical diagnosis were noted down. FNAC slides were routely stained with Hematoxylin and eosin stain and Papanicolau stain. For histopathological examination we used Hematoxylin and eosin Stain. The cytological diagnosis was then correlated with the histological diagnosis.

P arotid gland was the commonest site of involvement seen in 31 cases followed by submandibular gland (6 cases). In the parotid gland out of 31 cases, 22 cases were benign lesions and 9 cases were malignant lesions. Two cases were located in the minor salivary gland with one case being pleomorphic adenoma in the parapharyngeal region and the other one was mucoepidermoid carcinoma in the left hard palate. Common site of salivary gland tumour presentation are depicted in Table 1.

For all the 40 cases, histopathological examination w as done and out of 40 cases, 28 cases (70%) were benign lesions and 12 cases (30%) were malignant lesions. Among the benign cases, the most common benign tumour was pleomorphic adenoma reported in 22 cases, of which 16 cases were seen in parotid region, 5 cases seen in submandibular region and one case in parapharyngeal region. Other benign neoplasms reported were three cases each of basal cell adenoma (Figure 2) and Warthins tumour (Figure 3); both were see n in parotid region. Among the malignant neoplasms, mucoepidermoid carcinoma was the commonly reported tumour seen in 6 cases accounting for 15%. Other malignant lesions were Adenoid cystic carcinoma (4 cases), Salivary ductal carcinoma (1 case) and Carcinoma ex Pleomorphic adenoma (1 case). One case of mucoepidermoid carcinoma was reported in the left hard palate. 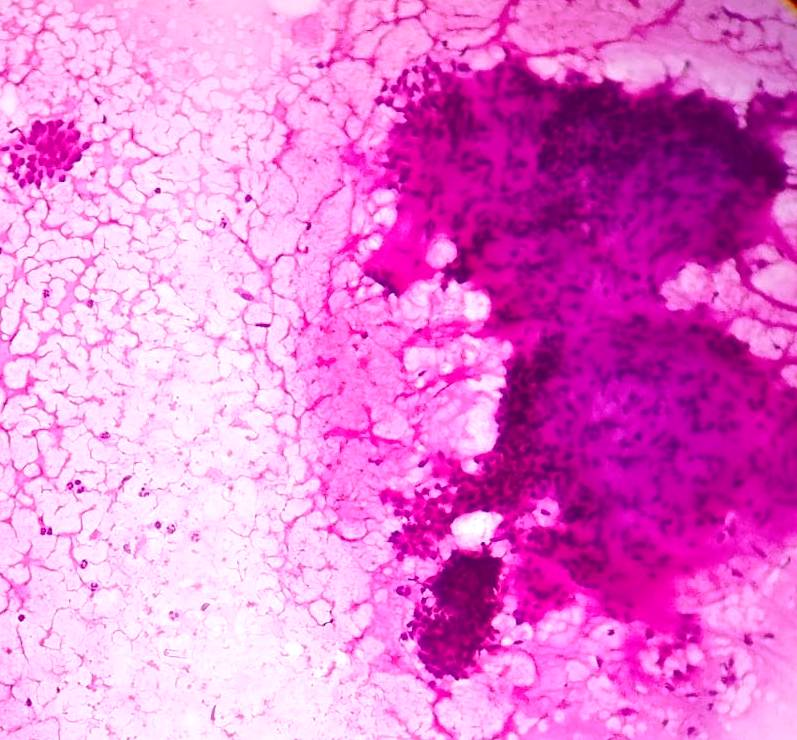 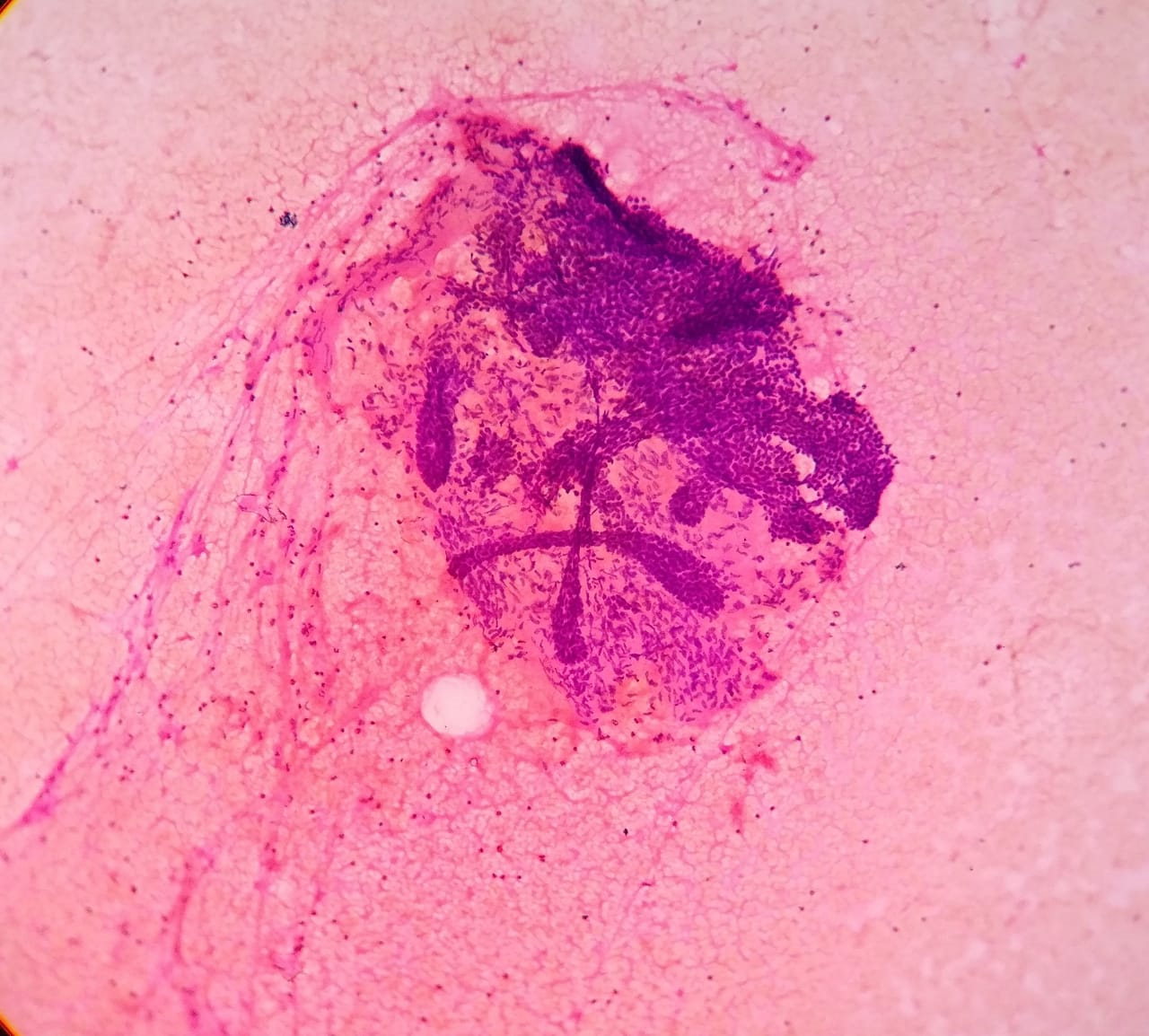 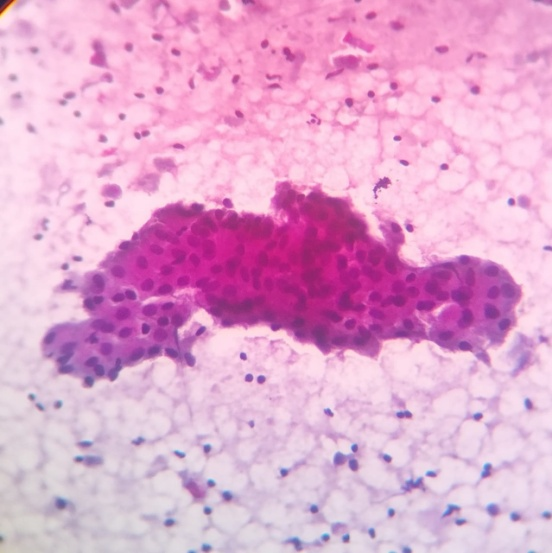 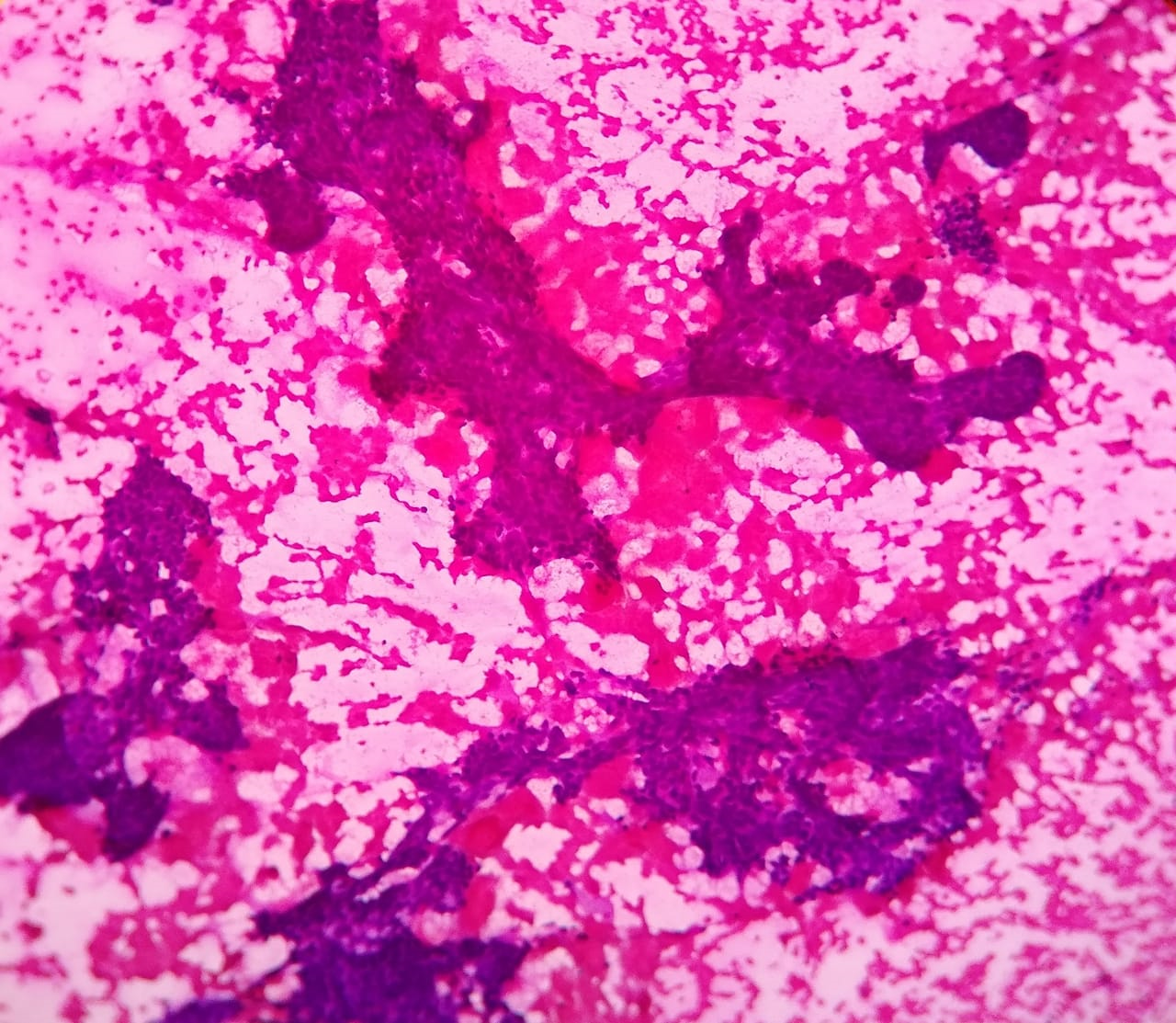 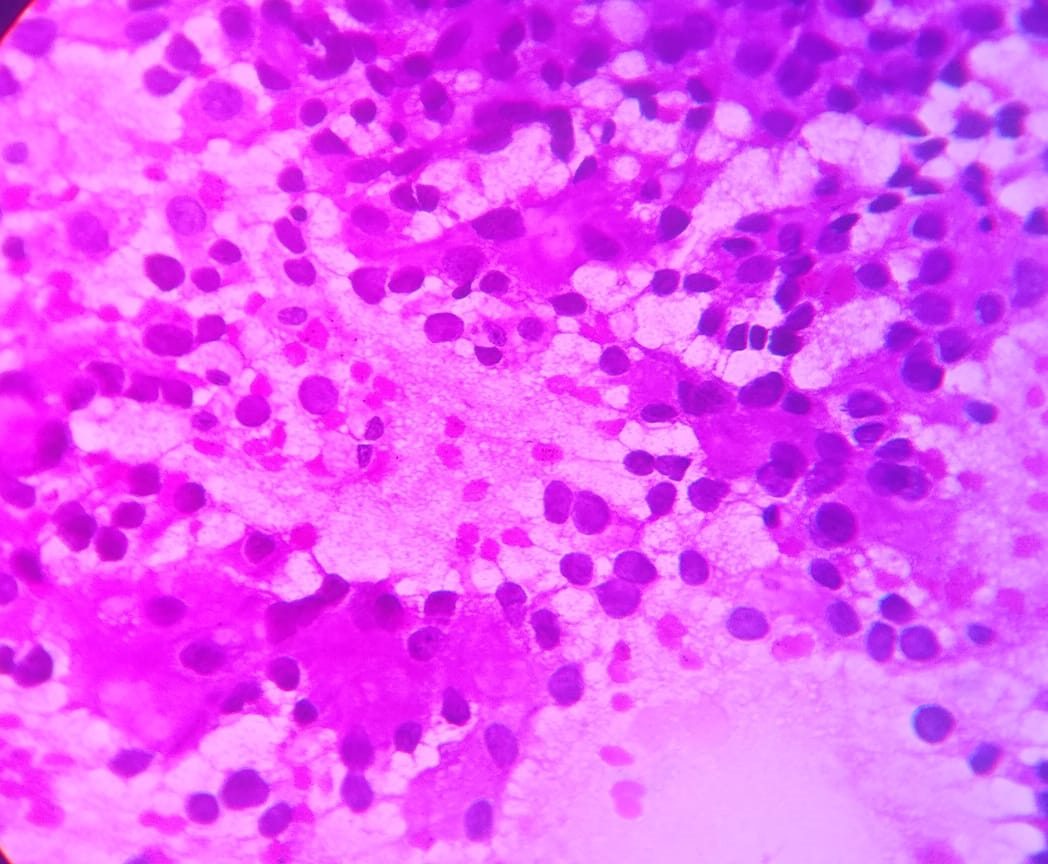 FNAC is an easy and less invasive method which helps in determining the nature of the salivary gland lesions, still histopathological examination is the gold standard. 10 The cytology diagnosis also helps in planning for the surgery.13, 12, 11

The diagnostic accuracy in the present study was observed to be 80%, whereas according to Sneha et al12 it was 94.87% and Anitha Omhare et al15 has observed 93.3% for benign and 88.2 % for malignant tumours.

FNAC can be a useful tool in reducing the rate of salivary gland surgery by one third of cases and in patients undergoing radical surgery. FNAC helps in planning a perfect surgical approach. To conclude the accuracy of FNA in neoplasm is almost 80% and much better for benign than for malignant neoplasms.

No potential conflict of interest, relevant to this article has been reported.