Introduction: The liver is a common location for primary as well as secondary malignant tumours, and the clinical and imaging findings are usually nonspecific. Though histopathology is the gold standard, ultrasound-guided fine needle aspiration cytology offers promising results.

Materials and Methods: A total number of 38 patients with single and multiple space-occupying lesions of the liver, were subjected to ultrasound-guided FNAC and the cytology features were analyzed.

Results: The present study included hepatocellular carcinoma (11), hepatoblastoma (1), and metastatic deposits (19). Four cases were inflammatory, and the rest were cell poor and inconclusive.

Conclusion: Ultrasound guided FNAC is an affordable and accurate means of confirming the diagnosis of the primary and secondary malignant tumors of the liver.

Fine needle aspiration cytology (FNAC) is a time-tested simple investigation for the preoperative diagnosis of palpable tumors of superficial organs. The introduction of FNAC has changed the concept of initial diagnosis from complex time taking histopathology to safe, cheap, rapid and relatively painless cytology. The diagnostic accuracy of FNAC comparable to that of histopathology made FNAC acceptable to both clinicians and pathologists. The advantage of FNAC is allowing the clinician to plan for the treatment. It has an immense role in diagnosing inoperable lesions.1

Initially, FNAC was applied to tumors of surface organs like thyroid, breast and lymph nodes. With imaging techniques, guided aspiration for deep-seated lesions of liver and lung become a routine procedure. Of these imaging methods, ultrasound (US) is the only real-time guidance, and it provides incessant real-time needle tip visualization. Availability, relatively low cost, speed and absence of radiation are the advantages of US, making it the preferred method for guided FNAC.2, 1

FNAC under US guidance allows accurate localization and sampling of focal space-occupying lesions of the liver. Liver is a common site for both primary and secondary malignancies, and US-guided FNAC is the main method of investigation. Hepatocellular carcinoma (HCC) is the most common primary malignant tumor of the liver, which usually presents with unifocal and sometimes with multifocal lesions. Liver similar to the lung is a common location for metastatic tumors, the morphology of which overlaps with that of the primary. Both primary and metastatic malignant tumors of the liver are inoperable at the time of presentation, making US-Guided FNAC the investigation of choice by providing an accurate diagnosis with rare complications if any.4, 3

With this concept, we studied the cytology features of focal liver lesions by ultrasound-guided FNAC.

A total number of 38 patients with single or multiple space-occupying mass lesions of liver were subjected to US guided FNAC for a period of 1 year at departments of pathology and radiology, Rangaraya Medical College, Kakinada. After taking consent from the patient, detailed clinical and radiological data were obtained. Hemoglobin percentage, bleeding time, clotting time and prothrombin time were done and vitamin K injections were given. Then the patients were subjected for ultrasound guided FNAC at Radiology department. The smears were fixed in isopropyl alcohol and stained with Hematoxylin and Eosin. Air-dried smears were fixed in methanol and stained with May-Grunwald Giemsa stain. The smears were correlated with cellblocks and histopathology for available cases.

All patients, except for a five months old child were adults with age ranged from 30 to 70 years. The peak incidence was in the fifth decade. The male to female ratio was almost equal (1.5:1). The common presentation was abdominal lump with or without pain. The ultrasound findings were noted and correlated with cytology features.

The diagnosis was possible in 35/38 liver lesions, while the rest were cell poor and inconclusive. Out of these 35 liver lesions, 31 cases were found to be neoplastic, and all were malignant, which include 19 metastatic and 12 primary carcinomas. Remaining four cases were inflammatory lesions. The details were tabulated in Table 1.

The details of the cytology diagnosis

Hepatocellular carcinoma was the single most common primary malignant tumor in the present study. The cytology features were analyzed and summarized in Table 2.

In most of these primary carcinomas, the neoplastic cells were recognizable as hepatocytes and showed a variable degree of pleomorphism. The classic cytology features like the trabecular arrangement, endothelial wrapping, bare oval nuclei, intranuclear inclusions and cytoplasmic vacuoles were observed. (Figure 2, Figure 1)

Histopathology was available for two of these cases.

A single case of Hepatoblastoma was diagnosed in a five months old child. The cellular smears were composed of many discrete and small groups of small round cells. Few two cell thick cord-like structures were also seen.

This case was followed by histopathology, which confirmed the diagnosis.

Nineteen out of 38 liver lesions were metastases, of which 14 were adenocarcinoma. In 11/14 adenocarcinomas, the primary lesion was known whereas in 3 cases the primary was not identified. (Figure 4, Figure 3)

The details of the metastatic carcinomas were shown in Table 3.

The details of metastatic tumors of liver

Two of these cases were confirmed by histopathology. 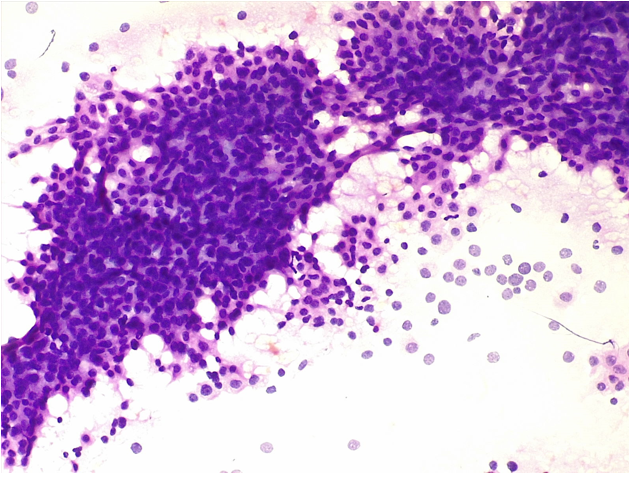 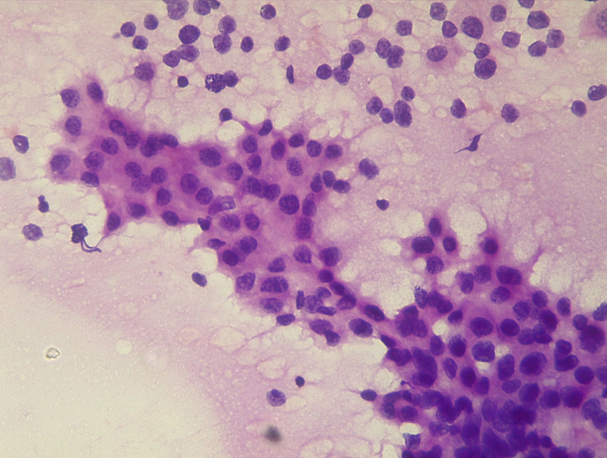 Cytology of carcinoma breast metastatic to liver. Clusters of malignant epithelial cells with necrosis in the background. (H&E, 20X). 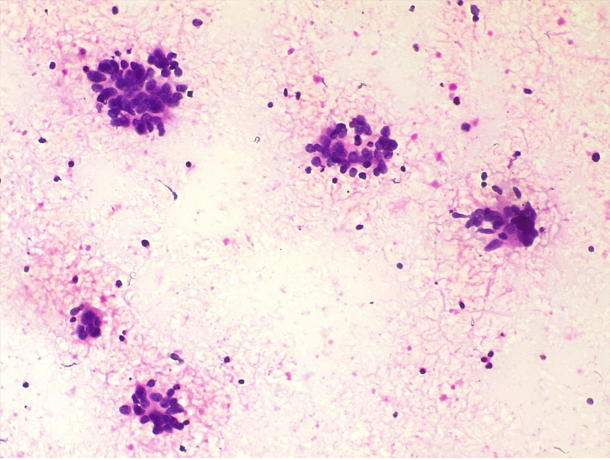 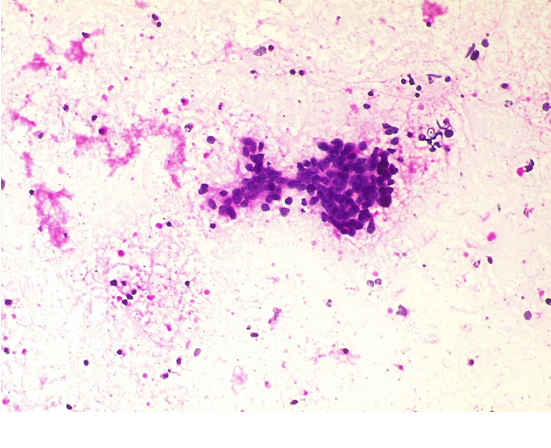 Mass lesions involving liver remain asymptomatic for long duration and hence present in an advanced stage. As most of these tumors are impalpable, single or multiple focal abnormalities displayed on US or CT scan, comprises the main indication for FNAC of the liver.5 The liver is known as a common site for metastatic malignancy for its rich dual vascular supply. The incidence of HCC is high in Asia and Africa, compared to the west, which is attributable to chronic infection with hepatitis B and consumption of Aflatoxin.6

Hepatocellular carcinoma has distinct cytological features, which enable it to differentiate from more common metastatic malignancies, rare pediatric primary tumors and benign tumors. The usual cytology features of HCC are cell-rich smears composed of neoplastic cells resembling hepatocytes arranged in the form of cohesive trabecules, irregular clusters and cords. Peripheral wrapping and transgressing endothelium are characteristic features. Intracytoplasmic and intranuclear inclusions are also seen. Presence of multinucleated tumor giant cells favor primary rather than secondary. Bile ductal epithelial cells will be either absent or few. Plenty of bare nuclei is another consistent feature, which helps in the diagnosis.10, 9, 8, 7

Of all these cytology features of HCC, intracytoplasmic bile is diagnostic, but is rare. Similarly, endothelial wrapping is specific for HCC but is observed in 50% of cases only. On the other hand, traversing capillaries is observed in 90% of these carcinmomas, lack specificity as is seen in other malignancies like Renal cell carcinoma.10 On cytology, HCC is categorized into three grades 1,2 and 3, of which grades 1 and 2 correspond to well and moderately differentiated HCC and grade 3 is subdivided in to poorly differentiated and pleomorphic types.11

The distinction between moderately and poorly differentiated HCC and metastatic malignancy is difficult and often challenging. The architectural arrangement and cytological details of secondary tumors depend on the primary. In general, the smears are cellular and arranged in multilayered clusters of pleomorphic malignant epithelial cells. Prominent necrosis is a feature favoring metastases. Similarly, the presence of normal hepatocytes amidst malignant cells is an indication of secondary malignancy. Carcinoma colon is the most common malignancy metastatic to the liver. The diagnostic clues on cytology are necrosis, columnar cell morphology and presence of mucin.10

Carcinoma breast is another common primary metastatic to the liver in females. Presence of cell balls and single files of malignant epithelial cells is the usual cytology picture. Intracytoplasmic lumina indicate lobular carcinoma.12 Metastatic spread of carcinoma breast to the liver is usually a late event, and history provides valuable information.

Apart from cytology, thorough clinical and radiological examination for primary elsewhere should be done for all focal lesions of liver. Cirrhosis of the liver, HBV and HCV positivity and elevated Alfafetoprotein levels strongly suggest primary than secondary.

Hepatoblastoma is a rare primary malignant tumor of liver in children. It presents with hepatomegaly as a lump abdomen and like hepatocellular carcinoma is associated with elevated Alfafetoprotein levels. The cell of origin is from primitive embryonal hepatocytes.14 Recent research proposed that beta-catenin mutation is responsible for the development of Hepatoblastoma and increased beta catenin is observed in most cases of Hepatoblastoma.14 Hepatoblastoma is classified into three types, epithelial, mixed and anaplastic or small cell.15 The cytology picture resembles that of any embryonal small round cell tumor and is subtyped into fetal, embryonal, combined epithelial and mixed.

The present study emphasizes that US guided FNAC is an accurate investigation for the evaluation of nonresectable focal lesions of the liver. It is useful in diagnosing and differentiating primary and secondary malignant tumors of liver.