Introduction: Burkitt lymphoma is an aggressive type B-cell NHL. It is an infrequently occurring aggressive B-cell NHL, which occurs in children and young adults and it is probably the fastest growing tumor in humans, with exuberant proliferation. However, it is now one of the most curable conditions in the developed world.

Objective: The aim of this study to analyze the clinico-pathologic, immunophenotypic, cytogenetic and molecular pathology of cases diagnosed as Burkitt lymphoma/leukemia.

Materials and Methods: All cases diagnosed as Burkitt lymphoma/leukemia (BL) between2008 and 2016 were included in this study. All the relevant data was collected from Pathology and Oncology records. Peripheral blood, bone marrow smears and histopathology slides were reviewed. Stains like Giemsa, Oil -Red-O and Hematoxylin and Eosin (H&E) were reviewed. Immunohistochemistry with lymphoma markers were done on tissue sections. Immunophenotyping on marrow aspirates was done with 4-color flowcytometry. Flourescence In-situ Hybridization (FISH) assay was performed on some bone marrow aspirate samples.

Results: During this study period, 37 cases were diagnosed as Burkitt leukemia / Lymphoma. There were25 male and 12 female (M: F: 2.2:1). Ten patients had hepatosplenomegaly and 8 had lymphadenopathy. B-type symptoms in 21 patients and raised LDH levels in 17 cases were observed.

There were 25 patients diagnosed on bone marrow studies (21 fresh cases and 4 cases of relapse). Twelve patients were diagnosed as high grade NHL on histopathological examination (HPE). Flow analysis was done in 6 cases, which were positive for CD10, CD19, and CD20. Immuno histochemistry on biopsy specimens was done in 12 cases and 3 trephine biopsy sections were positive for B-cell lymphoma markers with high Ki67. FISH analysis was performed on 5 specimens and showed c -MYC rearrangement and t (8-14) translocation

Conclusion: Burkitt lymphoma/leukemia is an aggressive variant of B cell NHL. It has classical morphology with monomorphic large lymphoid cells with prominent punched out vacuoles, positive for lipid vacuoles. Even with aggressive chemotherapy, seven cases were in remission and majority patients expired. As per our knowledge this is the largest case series from India.

Burkitt’s lymphoma (BL) is a high-grade B-cell neoplasm occurring most commonly in children living in endemic and hyper endemic areas for malaria infection, and with lesser frequency in all other parts of the world.2, 1 The ability of the Epstein-Barr virus (EBV) to transform lymphocytes by inducing the translocations typically found in BL appears to be augmented by malarial parasitaemia. These translocations involve the c-Myc oncogene on chromosome 8 and one of the immunoglobulin heavy or light chain loci on chromosomes 2, 14 and 22. This aggressive neoplasm is classified as a Non-Hodgkin's Lymphoma (NHL) and has the quickest doubling time among human tumors.3 BL is subdivided into three different categories based on epidemiological observations: endemic BL (eBL), sporadic (sBL), and HIV-associated BL. The endemic form is characterized by a jaw mass with or without abdominal disease. Bone marrow involvement is rare (7%) but central nervous system involvement is more common (19%). The sporadic form found throughout the western world typically presents as an abdominal mass (88%). Bone marrow involvement is more common than in the endemic form (21%) while jaw masses (14%) and central nervous system involvement (11%) are less common. In India, most cases fall into the sporadic group. About 95% of eBL cases are associated with Epstein - Barr virus (EBV) and are commonly found in Equatorial Africa and Papua New Guinea where malarial diseases are highly prevalent. In contrast, only 5–15% of sBL and 40% of HIV-associated BLare EBV positive.6, 5, 4 EBV which is responsible for BL has a double stranded DNA and is enclosed in icosahedral-shaped capsid. It belongs to herpes family. Universally more than 90% of all people become infected with EBV at some point during their lifetime but most of the infected individuals remain healthy. EBV is capable of leading to pathologic conditions, being linked to a variety of disorders and malignancies. Immunodeficiency’s resulting from certain genetic disorders, organ transplantation, or infectious diseases (e.g., AIDS, malaria) can lead to reactivation and outgrowth of these EBV-infected B cells.7 EBV infection can also lead to the generation of a number of proteins (e.g., EBNA1, cmyc ) which are involved in decreasing immune recognition of malignant B cells.

Aim of the Study

To analyze the clinico-pathological, i mmuno-phenotypic, cytogenetic and molecular pathology of Burkitt’s lymphoma/leukemia. This study was undertaken as there are very few case series from the Indian sub-continent.

Results During this study period, 37 cases were diagnosed as Burkitt lymphoma /leukemia. There were 25 male and 12 female (M: F: 2.2:1), wit h a mean age of 55 years (ranging between 4 and 69). The clinical presentation of Burkitt leukemia /lymphoma differed, depending on the site of involvement. Twenty one patients had B type symptoms at presentation, 8 patients presented with pancytopenia and bone marrow revealed the diagnosis. Hepatosplenomegaly was seen in 10 patients, lymphadenopathy in 11 cases. Commonest site of lymphadenopathy being cervical followed by mesenteric and abdominal lymphadenopathy. LDH was raised in 17 cases, ranging from 667 to 5200 IU/l. No patient was immunocompromised or HIV positive in this study.

Peripheral blood and bone marrow samples were evaluated in 25 patients; among which 21 cases had morphological features most consistent with Burkitt leukemia. Tumour cells ranged from 49 to 96% in marrow aspirates or imprints smears. Trephine biopsy sections showed monomorphous population of cells present in diffuse or interstitial infiltrate pattern. The bone marrow aspirate smears showed intermediate-sized lymphoid cells with basophilic cytoplasm, round to slightly oval nuclei, and prominent, sharply defined, clear vacuoles of varying size. Punched out vacuoles were found overlying the nucleus as well as in the cytoplasm (Figure 3, Figure 2, Figure 1). Auerrods (or) cytoplasm granules were not seen. There were 4 cases showing marrow relapse in treated cases of Burkitt leukemia/lymphoma (BL) diagnosed previously. Cytochemistry was done using Sudan Black B (SBB) and Periodic Acid Schiff (PAS) stains on all 25 marrow samples, SBB was negative in all cases, PAS block positivity seen in 7 cases. Oil red O stain for lipid vacuoles was positive in 19 cases, 3 cases were negative and noncontributory in 3 cases. 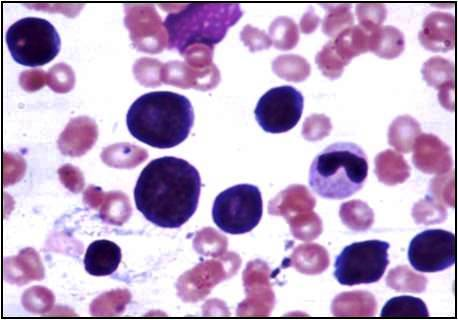 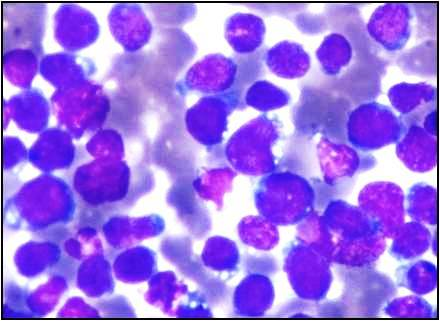 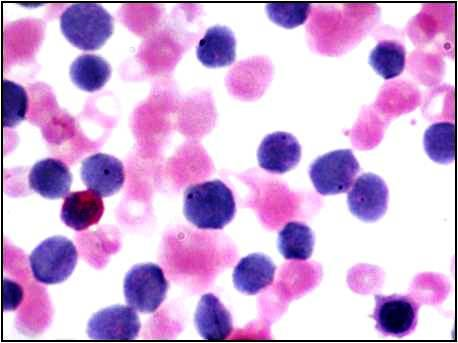 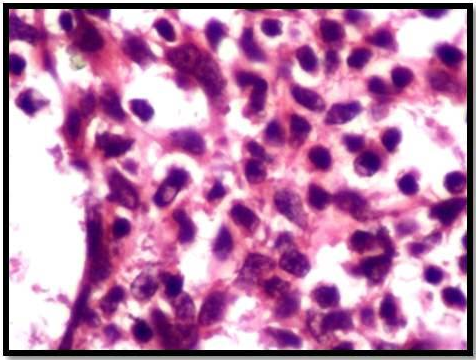 (a, b, c & d): a: Immunohistochemical staining revealed the expression ofCD20; (b): and CD10; (c): by the neoplastic cells. Cytokeratin highlights thelymphoepithelial lesions; (d): Ki-67 immunostaining showed a high proliferationindex (95%) 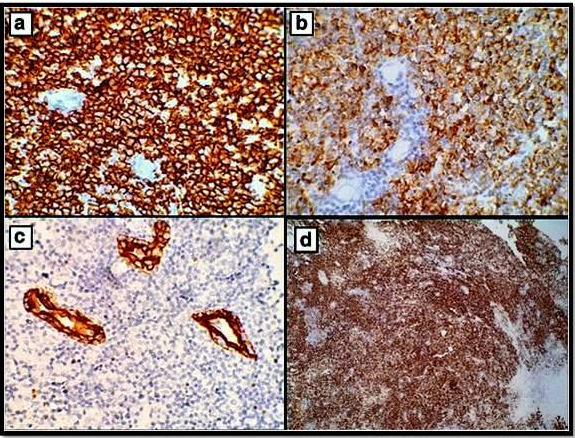 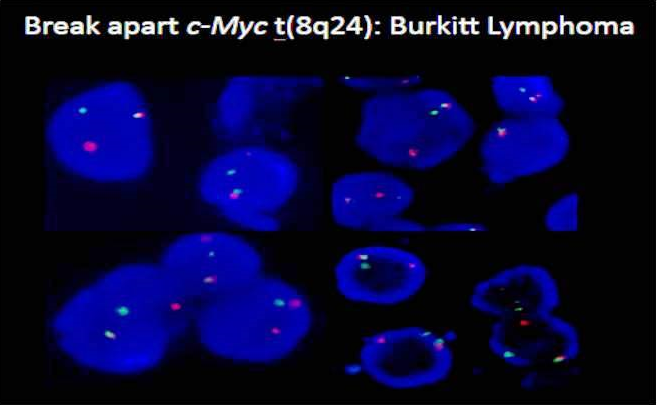 Burkitt lymphoma was first described by Dennis Burkitt in Uganda in 1958 as a ‘sarcoma involving the jaw in African children.’8 He observed its dramatic response to chemotherapy, demonstrating a number of long-term remissions with one or two doses of cyclophosphamide.9 Further evaluation showed that this endemic variant was clinically related, and histological identical, to the abdominal form that constitutes the sporadic variant. Initially treatment consisted of surgical cytoreduction, where possible followed by chemotherapy.7, 10

The subsequent evolution of Burkitt lymphoma treatment has seen the use of increasingly intensive chemotherapy and a reduction in the role of surgery. Early work demonstrated increased survival where complete resection could be achieved and advocated an aggressive surgical approach to Burkitt lymphoma.12, 11 As the efficacy of chemotherapy regimens improved, it became obvious that aggressive attempts at surgical cyto reduction delayed the administration of chemotherapy, and was associated with an increase in complications requiring surgical intervention. 14, 13 Debulking surgery to reduce tumor bulk no longer appears to be necessary. Surgery is now only required for diagnostic purposes, or in the event of surgical complications of the lymphoma such as intestinal obstruction.

While regimens such as COMP15, on which P1 was based, proved very effective for patients with localized disease, cure for those with dissemination to the bone marrow or central nervous system remained elusive. Successive studies by groups in France and the US showed that high cure rates could be obtained with more intensive chemotherapy.18, 17, 16 The French reported a 5-year overall survival of 100% for group A, 94% for group B and 85% for group C. 19

This study included 25 patients of Burkitt leukemia diagnosed on bone marrow studies and 12 cases diagnosed on tissue biopsies. These fitted the profile of the sporadic type of Burkitt lymphoma. None of the cases were immunocompromised. Among 25 bone marrow patients, 18 cases expired or did not turn up for follow-up and 7 cases were in remission. Out of 12 patients diagnosed on histopathology, the median survival after diagnosis was 5 months. The findings of this study were compared with various studies conducted around the world in terms of age, gender ration, EBV association, chief complaints and involvement of bone marrow. Comparison is tabulated (Table 1)

The present study has included both adult and pediatric population. Other studies mainly done on pediatrics population.

Burkitt lymphoma/ leukemia is a unique B- cell neoplasm that has taught us much regarding lymphomagenesis. It is the first human tumor to be causally associated with a virus (EBV). The c-myc of Burkitt lymphoma is the first oncogene to be described in a lymphoma. Among human neoplasm, it has the shortest doubling time. Its unequalled proliferation rate creates special challenges for diagnosis and treatment. In present series, only seven cases are in remission and rests expired or were lost to follow-up.