Introduction: Neoplastic lesions of thyroid are common diseases that affect people all over the world. These lesions presents clinically in various forms having wide spectrum of presentation. Thyroid malignancies approximately are estimated to be constituting between 1-1.6% of all cancers, and thyroid tumours form around 90% to 93% among all malignancies of endocrine. Examination of these neoplastic thyroid lesions histopathologically form an important and confirmatory tool in the diagnosis of the neoplastic thyroid lesions.

Materials and Methods: 75 cases of neoplastic thyroid lesions were studied and analysed, in the present study, this study was conducted in the Department of Pathology of an autonomous institute run by Government of Karnataka, RIMS, Raichur, India. The total study period was three (3) years. Out of these 3 years, retrospective study formed bulk of the study which was 2 years and prospective study was for a period of 1 year. The histopathologically diagnosed thyroid tumors were classified based on WHO classification of thyroid tumors.

Results: After Histopathological diagnosis, Results were analysed, and showed that neoplastic lesions of thyroid constituted 75 cases, out of which, a total of 81.3% were diagnosed in females and 18.7% cases were diagnosed in males, and these lesions were predominantly seen in female patients giving a female: male ratio of 4.3:1.

Study showed that the youngest patient was aged 12 years and the oldest patient was aged 65 years at the time of presentation, with a mean age of being 38.5 years. Follicular adenoma was diagnosed in 53.33% with 40 cases followed by malignant neoplastic thyroid tumour, papillary carcinoma accounting for 44.00% with 33 cases, other lesion that was diagnosed was follicular variant of papillary carcinoma in 2.67% 2 cases.

Conclusion: The occurance of neoplastic diseases in thyroid nodules is of major health concern. Present study is done to know the statistical incidence of neoplastic thyroid lesions in this region and to evaluate and confirm the diagnosis histopathologically of these thyroid tumors and classify their subtypes in detail.

Thyroid gland lesions are considered to be the most common tumor among all endocrine tumors and one of the most common lesion that affect people all over the globe. They form a spectrum of lesions that range from a simple colloid goitre at one end to a bizarre anaplastic tumors at the other end. The incidence of these thyroid neoplastic diseases varies from one geographical area to other with wide range of differences in their presentation.1

Indian population is more prone to lesions of thyroid due to various etiological factors. Statistics showed that around 40 to 44 million Individuals are suffering from neoplastic thyroid diseases with varied spectrum of presentations clinically, radiologically and histopathologically.2

Malignancies of thyroid are not so common, constituting around 1 to 1.6% of all tumors, but when viewed with endocrine tumors it is the most common, representing around 90 to 93% of all endocrine malignancies the most commonly encountered benign tumour is follicular adenoma and the predominant stake holder in case of malignant tumor is Papillary carcinoma followed by other types of thyroid malignancies like follicular carcinoma, medullary carcinoma, anaplastic carcinoma and lymphoma.3

Most of the thyroid malignancies occur in individuals who are euthyroid and usually presents as an asymptomatic solitary nodule.4

It is estimated that Papillary carcinoma which forms major junk among malignant tumors statistically constitutes 60 to 80 % of malignant thyroid tumours. It is most commonly encountered in women between 18-60 years of age group.5 On routine clinical examination Papillary carcinoma thyroid (PCT) usually presents as asymptomatic neck mass commonly cystic in consistency.6

Clinically any midline neck swellings form a major health concern as these may be neoplastic or non neoplastic lesions. Excision of these lesions Surgically and evaluating histopathologically are important in establishing the diagnosis of these neoplastic thyroid tumours.4 This study is undertaken to study the incidence and to evaluate histopathological examination of thyroid tumors and classify their subtypes in detail according to WHO classification.

The present study is a 3 years study with two (2) years of retrospective study from 2016 January to 2017 December and one (1) year of prospective study from 2018 January to 2018 December carried out in Pathology Department in an Government run autonomous institute RIMS, Raichur. The materials for the present study consisted of all types of surgically excised thyroid ectomy specimens. All the Clinical details for the retrospective study were retrieved from the old records in the department of Pathology. Paraffin blocks were sorted out based on the diagnosis and serial sectioning were taken and sections were stained with hematoxylin and eosin for histopathological study and special stains were utilised wherever required. For prospective study, after receiving the specimens, the gross features were noted and dissected tissues were fixed in 10% formalin.

After formalin fixation, they were processed and paraffin blocks were prepared. The blocks were sectioned serially and were stained with hematoxylin and eosin. Special stains were considered whenever required. A detailed microscopic study was done to arrive at an accurate diagnosis. The thyroid diseases were classified based on WHO histopathological classification of thyroid tumors.

All types of surgical excision done on neoplastic thyroid specimens that were clinically diagnosed as neoplastic lesions.

After analyzing the data from the 75 thyroidectomy specimens that were received at the Department of Pathology in an Government funded autonomous institute RIMS Raichur India, the study showed that out of 75 thyroidectomy specimens that were studied for a period 3 years. The youngest patient age was 12 years and the oldest patient was aged 65 years, and the mean age was 38.5 years and the peak age of incidence was seen between 30-39 years of age group. In 81.3% (61) cases of female population neoplastic lesions were identified and in 18.7% (14) males, these neoplastic lesions were identified, when data was analysed it showed that these neoplastic lesions were predominantly seen in females patients giving a female: male ratio of 4.3:1. 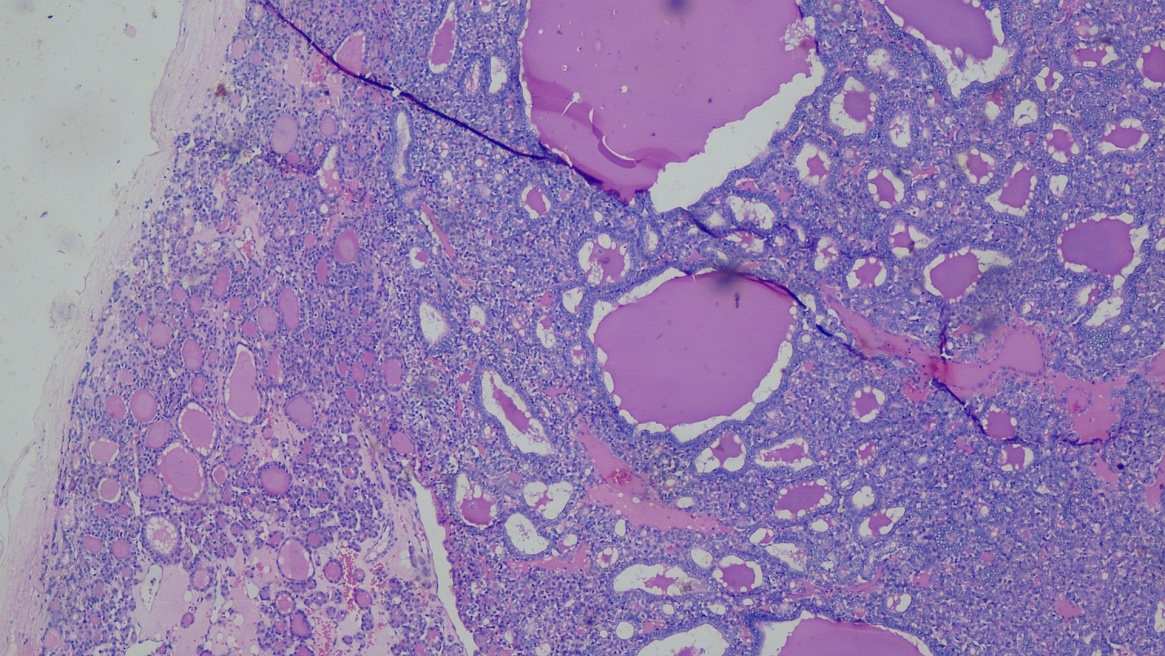 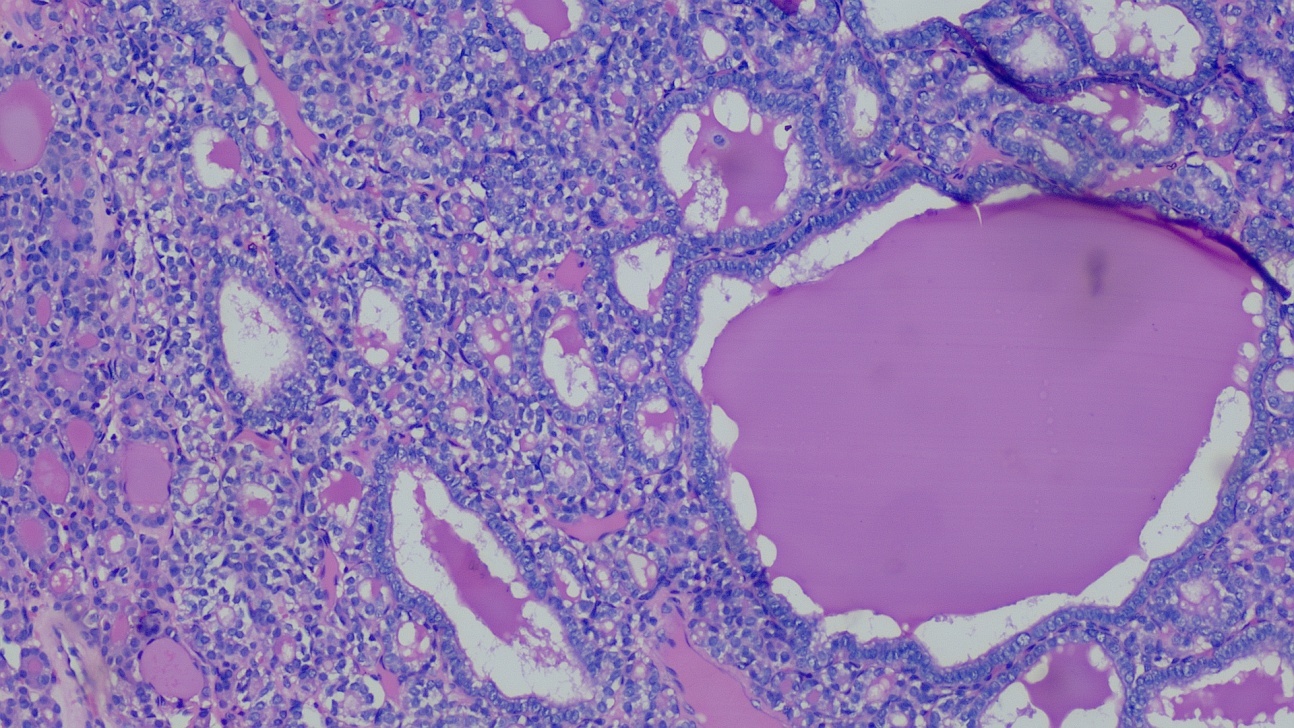 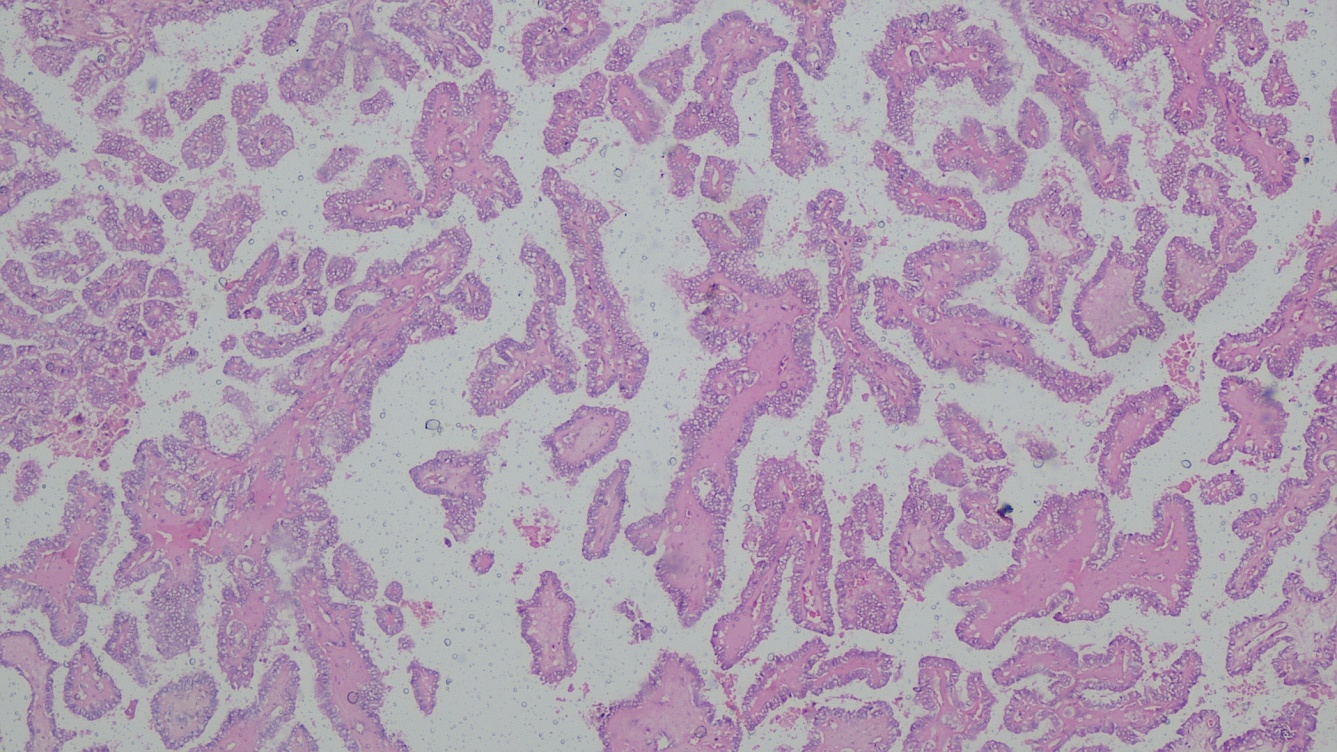 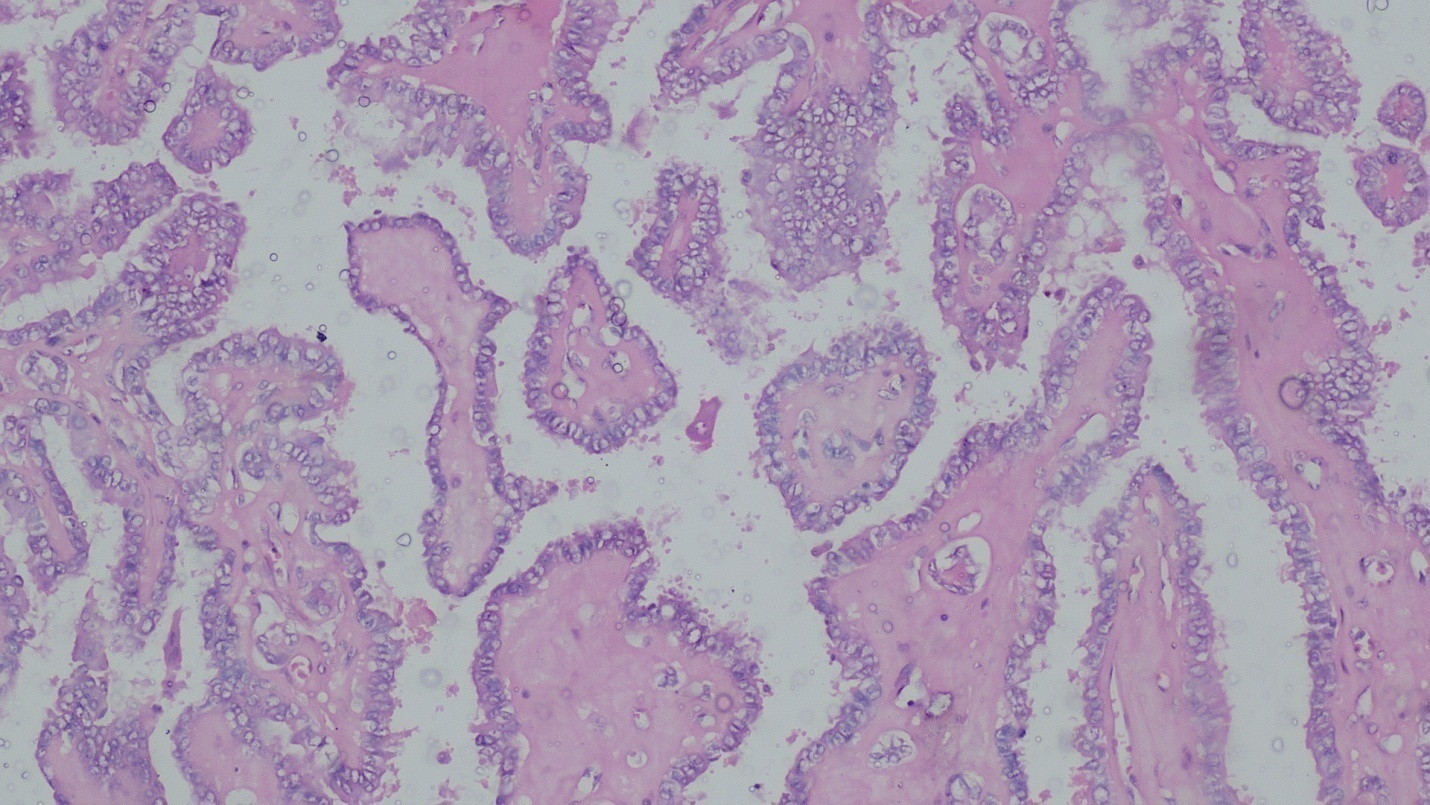 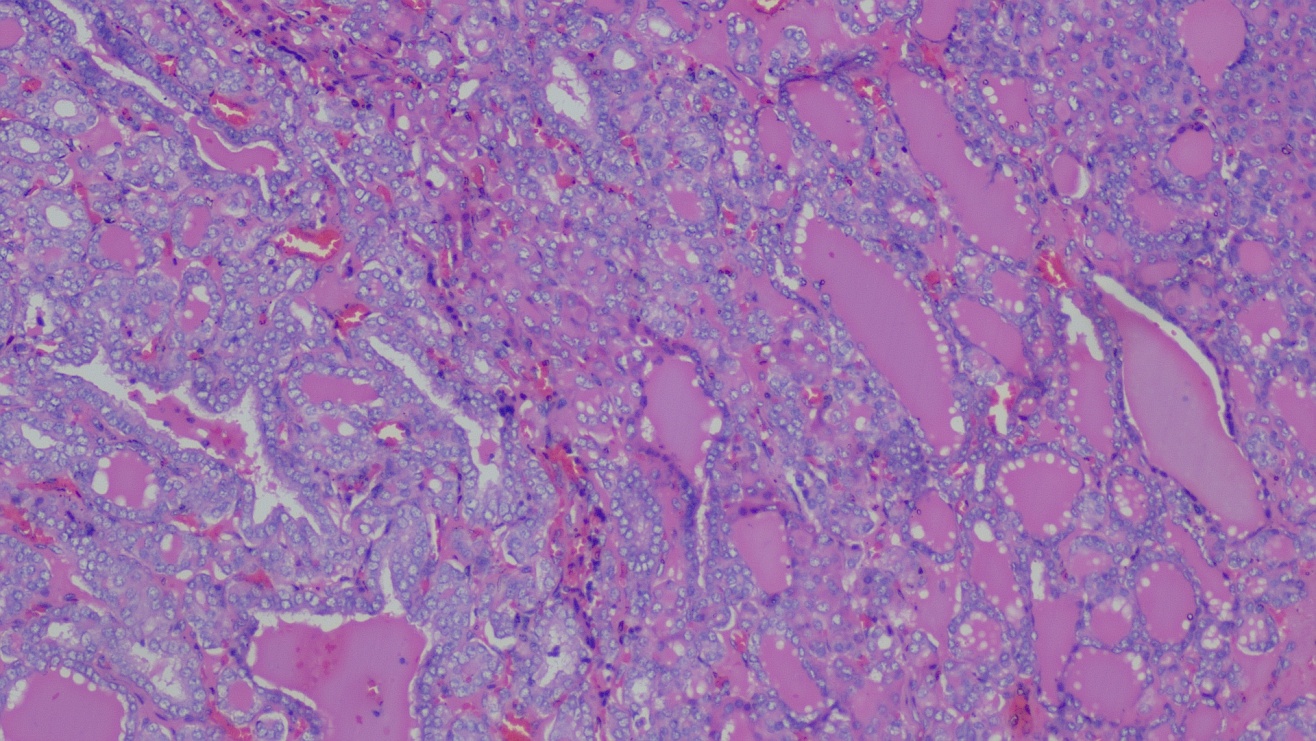 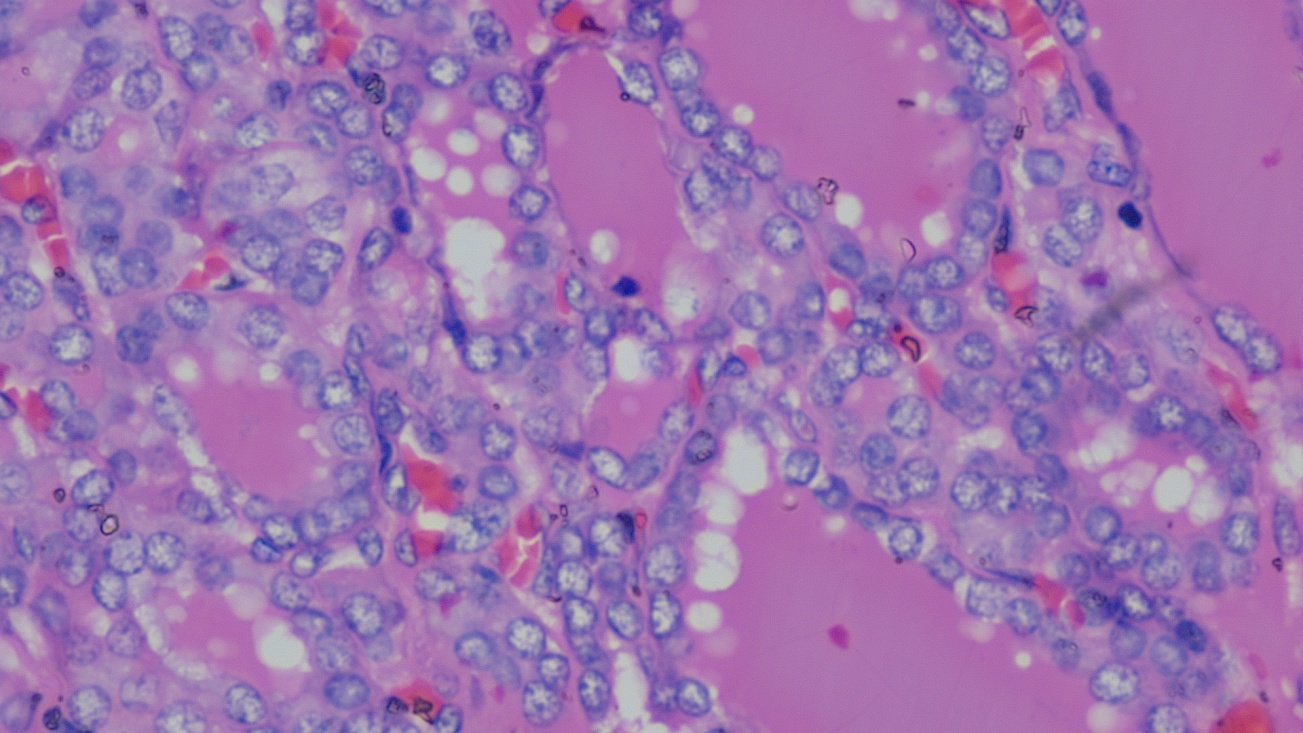 This study was analysed and tabulated in the Department of Pathol­ogy, RIMS, Raichur, India. An autonomous Government Medical college. A total of 75 thyroidectomy specimens of neoplastic lesions which were clinically diagnosed were studied for a duration of 3 years. In present study data showed that the youngest patient was diagnosed was at 12 years and the oldest patient was 65 years with a mean age of 38.5 years, with female: male ratio of 4.3:1. These findings were similar and correlated with study done by Sirpal7 where the mean age was 35.3 years and female to male ratio 4.5:1, In the study done by Beigh et al.3 Out of 282 thyroidectomy samples, 204 cases were diagnosed to be neoplastic lesions out of which 78.92% were females and 2 1.08% were males and the female: Male ratio was 3.75:1 which was in concordance with our study. The age range for benign neoplastic lesions were diagnosed between 9 to 65 years with the mean age being 38.11 years which is in concordance with the present study.

Follicular ad­enoma with 40 (53.3%) cases, was most commonly diagnosed benign tumor in our research work, which was in concordance and similar to study done by Bokhari9 et al (40%) whereas research work carried by Beigh et al3 showed follicular adenoma was commonest benign thyroid neoplasm accounting for 78.18% which is higher than the present study.

In the study done by Beigh et al3 the age range for malignant lesions was between 9 to 74 years with peak age between 20 to 29 years and followed by second peak between 30 to 39 years. Papillary carcinoma was commonest with 85.14% which is in concordance with the present study.

Peak incidence of occurance of thyroid neoplasms in present study is 2nd and 3rd decade of life. Thyroid cancer is most frequently encountered in younger and middle age groups with the highest incidence was found in the 2nd decade, 3rd decade and 4th decade of life.15

In study done by Ponniah et al6 observed that papillary carcinoma was predominantly found in females with 80.68%, where as in study done by Chehrei et al15 and Prades et al16 it was 83.6% and 82.18% respectively. In our study incidence in females was 91.4% which is similar to the above studies and can be correlated with these studies.

In present study 2 cases (5.7%) were follicular variant of papillary carcinomas, both cases were seen in females (100%) and were observed in 3rd decade of life which is in concordance with the study do ne by Ponniah et al6 studied who studied 38 cases and observed that 84.21% occurred in females.

Present study concludes that the incidence of these neoplastic lesions of thyroid are common among the younger and middle age group population with female preponderance. The present study also highlighted the histopathological pattern of neoplastic thyroid lesions in this region.