Objective: To assess the expression of VEGF-A in breast cancer patient and to find an association between VEGF- A overexpression and the clinicopathologic features.

Materials and Methods: The study was conducted from January 2010 through 2016. Formalin-fixed, paraffin-embedded blocks from 64 patients with breast cancer were included in this study. S treptavidin-biotin method was employed for immunohistochemical detection of VEGF.

Results: The detection rate of VEGF was 93.5%. There was a significant difference in the immunoexpression of VEGF A between the different histological types of carcinoma. However, no significant differen ces were noted among age groups, tumor sizes, perineural invasion and overall survival.

Conclusion: In our study, VEGF overexpression was positiv ely associated with only the histological type of breast cancer. Further studies involving patients with advanced diseases are required to establish an association between the VEGF-A over expression and survival outcomes and to use it as a prognostic biomarker.

Breast cancer is the most common cancer and the leading cause of cancer related mortality in women.1 Similar to other solid tumors, breast cancer also depends on tumor angiogenesis for the supply of nutrients and oxygen, thereby promoting the spread of cancer cells.2 Tumor angiogenesis occurs predominantly during the developmental and progression stages of cancer and plays a vital role in metastasis. Evidences from literature has demonstrated significant correlation between the VEGF expression in tumor tissue and microvessel density (MVD) in many solid tumors.4, 3 In breast cancer, the MVD has been reported as an important risk factor for metastasis and is associated with poor prognosis.6, 5 Hence, there has been lot of interest in exploring the role of angiogenesis in the diagnostic and therapeutic management of breast cancer.

VEGF-A is a secreted ligand that has specific receptors (VEGF-R1 and -R2) and is involved in the process of endothelial cell growth, motility, and blood vessel permeability.  The study by Hugo Arias-Pulido and colleagues demonstrated an increased risk of breast cancer death and recurrence in patients with high VEGF- A expression at baseline independent of clinico-pathological risk factors and treatment. They concluded VEGF-A expression levels at diagnosis to be an effective prognostic factor allowing individualization of therapy.9

Further, studies have reported significant correlation between VEGF-A concentration and MVD in patients with breast cancer.10 The study by Xie at al investigating the relationship between MVD, expression of VEGF-A and micro-metastases in peripheral blood of patients with breast cancer has reported a positive correlation between VEGF-A expression and axillary lymph node metastasis.11 As some of the breast cancers exhibit high angiogenic characteristics, several trials have evaluated the role of anti- angiogenic agents targeting VEGF-A as an therapeutic approach in breast cancer.14, 13, 12

As VEGF-A has been found to be an independent poor prognostic indicator for disease free survival and overall survival, this can be used as a biomarker to identify a subset of breast cancer at higher risk for development of recurrence and distant metastasis.15 Hence this study was undertaken to study the clinic-pathological association of VEGF- A in relation to demographic parameters, stage, histopathology, IHC markers and survival parameters in Indian women with breast cancer.

This was an exploratory non randomized retro-prospective observational study conducted at the Apollo Hospital, Bangalore. Data were collected retrospectively from 64 consecutive patients who had a histopathological diagnosis of breast cancer during January-June 2010. The patients were followed up till June 2016.

Patients were included in the study if they had: i) histologically confirmed breast cancer and had received treatment at our institute ii) patients who had ER /PR /Her2neu /Ki67 markers evaluated. Further, the patients who did not complete treatment and those who did not accept the planned treatment were excluded from the study.

The study protocol was approved by the institutional review board while confirming to the standards of the Declaration of Helsinki and its subsequent revisions.

For the Her2neu overexpression, the data were classified from 0 to 3 based on the criteria provided by Dako (Glostrup); the scores 0 and 1+ were considered as negative, 2+ as borderline, and 3+ as positive.16 All the cases with a 2+ score were sent for the FISH test, and cases with a positive FISH were counted as HER2neu positive.

The proliferative activity was determined by immu­ nostaining for the Ki-67 antibody (Dako, Glostrup, Denmark). The fraction of proliferating cells was based on a count of at least 500 tumor cells. The Ki-67 values were expressed as the percentage of positive cells in each case. The Ki-67 immunohistochemically stained slides for Ki-67 marker were divided into 2 groups: the cells that stained over 15% were considered as high Ki-67 expression and <= 15% stained cells were considered as low Ki-67 expression.17

Cross tables were made to know the frequency distribution of the variables, cross tables were tested by using Chi-square test where expected frequency was more than 5, and otherwise fisher exact test was used with 95% confidence level. Survival curves were constructed using the Kaplan-Meier product-limit method and statistical significance was assessed using the log-rank test. R Software was used to analyze data. A p value of < 0.05 was considered as significant.

A total of 64 patients with a median age of 52.50 years were included in the study. About 76.6% (n=49) had attained menopause and remaining 23.4% (n=15) were premenopausal status at the time of presentation. About 6.3% of the study population had positive family history of breast cancer. The clinicopathologic features of the study population are outlined in Table 1.

Association of VEGF-A with histopathological features

There was no significant association between the VEGF-A expression and other clinicopathological features including age (p= 0.063), menopause (0.238), tumor stage (0.132), tumor size (p=0.899), lymph nodes (p=0.195), lymphovascular invasion (p=0.383), perineural invasion (p=0.380) and estrogen receptor status (p=0.784). There was no significant association between VEGF-A expression and treatment modalities including chemotherapy and hormonal therapy.

In terms of overall survival, 2 patients each died in VEGF-A 1+, 2+ and 3+ expression groups respectively. Further there was no association of VEGF-A expression with survival (p= 0.871), Figure 1.

Association of VEGF-A with histology 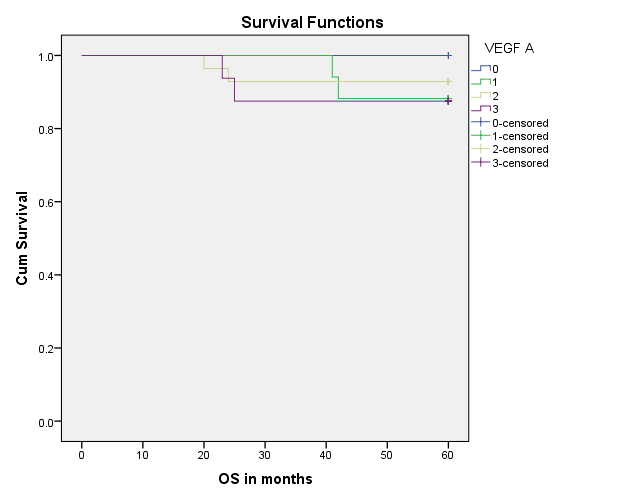 VEGF is a potent angiogenic growth factor that acts through receptor mediated pathways and is a potential target for antiangiogenic therapy.18, 17 In this study, we evaluated the association of VEGF-A expression with clinicopathological parameters and the survival outcome in 64 breast cancer patients at Apollo Hospital, Bangalore.

In the current study, positive over-expression of VEGF-A was noted in 95.3% of all the cases. This is higher than that reported previously including the studies by Cimpean et al. (87.3%) and Nakamura et al. (83.7%).19, 16 A variability of positive cases may be due to sample size and different clone of VEGF-A. In our study, there was no significant association of VEGF-A expression with that of age and menopausal status. The results of our study are similar to that reported by Cimpean and colleagues, where in they reported non-significant correlation (p = 0.1438) between age and VEGF expression.16

Our study had few limitations including the smaller sample size used for analysis of VEGF-A with clinicopathological markers, short follow up duration and the smaller number of metastatic patients included in the study.

The heterogeneous nature of breast cancer with several different subtypes with different molecular profiles, biological behavior, and risk profiles poses a challenge for therapeutic decision making process. From the data currently available on the role of VEGF-A expression in breast cancer, it may be concluded that results are contradictory and still inconclusive. In our study, VEGF-A expression as an independent prognostic factor in breast cancer was associated only with histology.