Introduction: The Bethesda System for Reporting Thyroid Cytopathology (TBSRTC) is a six category scheme for reporting thyroid Fine Needle Aspirates (FNAs) and represents a major step towards a uniform reporting system for thyroid FNAs, enabling better understanding of thyroid cytopathology report by referring clinicians and providing rational management guidelines. The present study was carried out to analyse cytological features of thyroid FNAs and categorise them by The Bethesda System for Reporting Thyroid Cytopathology; and to assess interobserver variability between two independent reporting pathologists using the Bethesda system.

Materials and Methods: The study was conducted over three years from Nov. 2015 to Oct. 2018 in the Department of Pathology, Government Medical College, Jammu. The thyroid FNAs were categorized according to the Bethesda system by two independent pathologists in a double blinded fashion. Interobserver variability was assessed by calculating percentage of agreement, disagreement and statistically using Cohen's kappa.

Conclusion: The present study thus encourages the use of The Bethesda System for Reporting Thyroid Cytopathology as a standardized reporting system with relative ease of reproducibility for effective communication among pathologists and clinicians with regard to thyroid Fine Needle Aspiration Cytology reporting and management.

Thyroid diseases are among the commonest endocrine disorders worldwide. About 42 million people in India suffer from thyroid diseases.1 Fine needle aspiration cytology (FNAC) is the first‑line diagnostic procedure for evaluating thyroid lesions. It is a simple, rapid, cost-effective test that provides valuable information about the nature of a thyroid nodule and can effectively distinguish between neoplastic and non‑neoplastic lesions of the thyroid therefore guiding appropriate management i.e. follow-up or surgery thus reducing unnecessary surgery for patients with benign disease.4, 3, 2

Reporting of thyroid FNA specimens should follow a standard format that is clinically relevant in order to direct appropriate management.5 The terminology for reporting thyroid FNACs has varied markedly worldwide with use of many reporting formats varying from two category schemes to six or more category schemes with some relying on descriptive phrases instead of categories.4, 3 This lack of uniformity creates confusion amongst referring clinicians in the interpretation of thyroid cytopathology report, thereby affecting definitive clinical management.2

To address terminology and other issues related to thyroid FNA, the National Cancer Institute (NCI) hosted the "NCI Thyroid Fine Needle Aspiration State of the Science Conference", a multidisciplinary conference that took place in Bethesda, Maryland, United States in October 2007,that led to the formation of The Bethesda System for Reporting Thyroid Cytopathology (TBSRTC), a six-category scheme for reporting thyroid cytopathology that recommends each report should begin with a general diagnostic category. Each of the categories has an implied risk of malignancy that links it to a rational clinical management guideline.6

Recently published data support the clinical utility and wide acceptance of TBSRTC by both practicing pathologists and clinicians. In Indian perspective too, many studies have been carried out that have concluded TBSRTC to be an effective reporting system for thyroid FNA. It improves perceptions of diagnostic terminology between cytopathologists and clinicians and also provides clear management guidelines to the clinicians.4, 2 In our institution, reporting of thyroid lesions on FNA is variable and no standardized system of reporting is being followed. The present study was thus carried out to analyse the cytological features of thyroid fine needle aspiration smears and categorise them by The Bethesda System for Reporting Thyroid Cytopathology; and to assess interobserver variability between two independent reporting pathologists using The Bethesda System for Reporting Thyroid Cytopathology.

The present study was conducted in the Department of Pathology, Government Medical College, Jammu over a period of three years from Nov.2015 to Oct.2018. It included all patients presenting with thyroid swelling referred to this department from various clinical departments of this hospital and from other health care centers. Non-cooperative and morbid patients were excluded from the study.

Smears were prepared from the sample obtained by aspiration or non-aspiration method and were stained with May-Grunwald-Giemsa (MGG) and Papanicolau (PAP) stains. Stained smears were examined under light microscopy by two independent pathologists in a double blinded fashion. The cytological features were evaluated and reporting was done according to The Bethesda System for Reporting Thyroid Cytopathology (TBSRTC).

Nondiagnostic is used to convey a sample that does not meet the adequacy criteria as given in the TBSRTC monograph. A thyroid FNA sample is considered adequate for evaluation if it contains a minimum of six groups of well-visualised follicular cells, with atleast ten cells per group, preferably on a single slide. Exceptions to this requirement apply to solid nodules with cytologic atypia, solid nodules with inflammation and colloid nodules where minimum number of follicular cells is not required for adequacy.

The aspiration smears were categorized as benign if they showed cytomorphological features of a benign follicular nodule, lymphocytic thyroiditis, granulomatous thyroiditis or other entities like acute thyroiditis as per TBSRTC.

This diagnostic category was reserved for aspirates that contained cells with architectural and/or nuclear atypia that was not sufficient to be classified as suspicious for a follicular neoplasm, suspicious for malignancy, or malignant. On the other hand, the atypia was more marked than could be ascribed confidently to benign changes.

This category included smears that were moderately or markedly cellular with significant alteration in follicular cell architecture, characterized by cell crowding, microfollicles, and dispersed isolated cells. Colloid was scant to absent.

Aspirates in this category were included as Follicular Neoplasm, Hurthle cell (Oncocytic) type if the aspirate consisted exclusively (or almost exclusively) of Hurthle cells having abundant finely granular cytoplasm, enlarged central or eccentrically located round nucleus, prominent nucleolus. Specimens were moderately to markedly cellular with usually little or no colloid and virtually no lymphocytes (excluding blood elements) or plasma cells.

A total of 610 patients were included in the study. The thyroid fine needle aspirates were categorized into the six categories of The Bethesda System for Reporting Thyroid Cytopathology by two independent pathologists.

The two pathologists were in agreement in 548 cases (89.84%) and disagreed in 62 cases (10.16%). Diagnostic agreement was highest in the Benign category (95.68%), followed by Malignant category (87.5%), Follicular Neoplasm (75%), Nondiagnostic (68%). No agreement was seen in AUS category and Suspicious for Malignancy category (0%, 0% respectively) between the two reporting pathologists (Table 2).

The interobserver variability was statistically assessed using Cohen's kappa coefficient with observed value of 0.628; 62.8% (95% Confidence Interval 54.0-71.6) i.e. actual agreement between the two pathologists beyond chance was 62.8% (moderate) in our study. 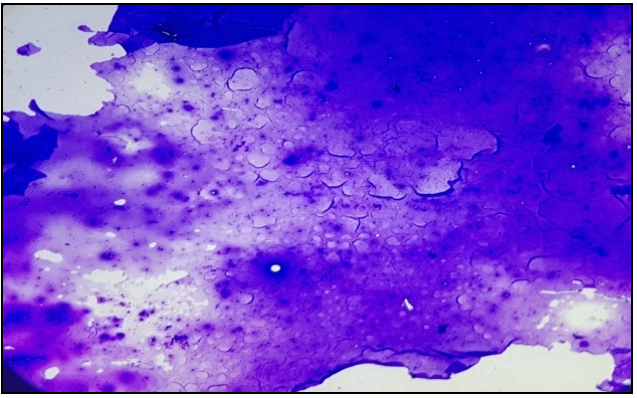 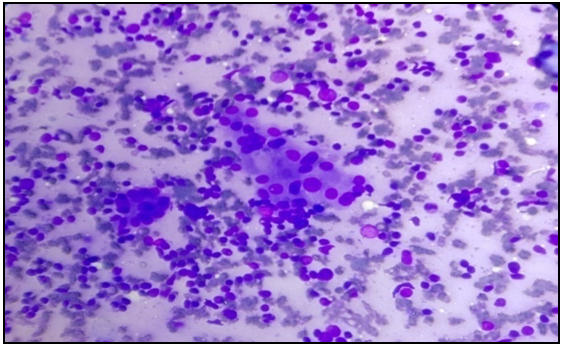 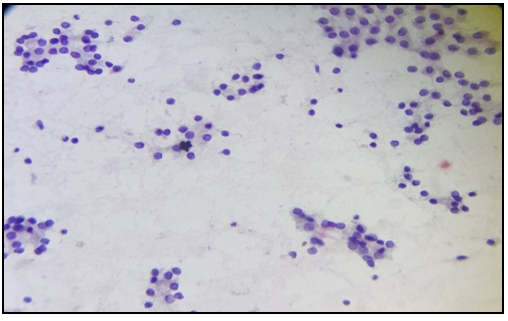 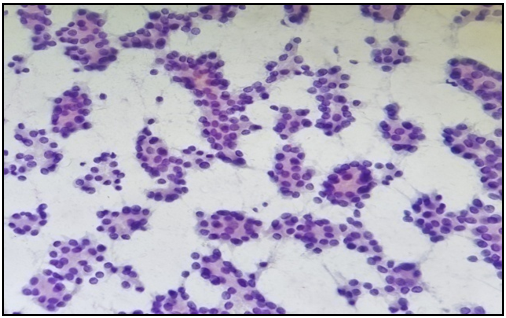 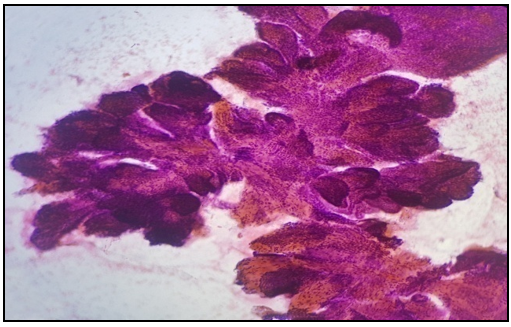 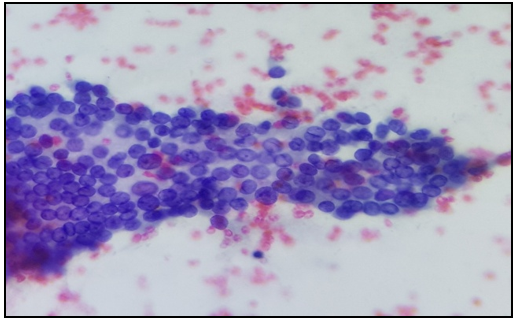 TBSRTC has been widely adopted in the United States and in many places worldwide and has been endorsed by the American Thyroid Association.8, 7 The distribution of cases into various TBSRTC categories by the two pathologists in our study were compared with other studies as shown in Table 3.

The frequency of Nondiagnostic interpretations varies notably from laboratory to laboratory (range, 3-34%).7 The findings of our study (8.36%, 8.20%) are consistent with this range and are comparable with other studies.9, 4 As most thyroid nodules are benign, a benign result is the most common FNA interpretation (approximately 60-70% of all cases).7 The cases in benign category in our study are higher than this range (85.90%, 83.61%) and also from study by Jo et al.10 but are comparable with other studies.11, 9, 4, 2 Being the only tertiary care center of our province, it caters to a large number of patients on both direct and referral basis, so a large population representative of general population is encountered that could be a reason for higher number of cases in benign category.

Diagnostic agreement was highest in the Benign category (95.68%), followed by Malignant category (87.5%) in our study. In a study by Bhasin et al.,13 maximum degree of agreements were noted in nondiagnostic (100%), malignant (100%) and benign (93.87%) categories. In a study by Awasthi et al.,12 there was absolute agreement on the cases in ND/US and AUS/FLUS categories followed by 94.8% concordance in benign category. Lesser number of cases reported under ND/US category in above two studies could be reason for absolute agreement in ND category in their studies. In a study by Salillas et al.,14 the category under which maximum degree of agreement was noted was malignant (100%, k=0.61) followed by benign (k=0.60).

Low reproducibility for AUS/FLUS has been reported, variability in criteria used for AUS/FLUS is responsible for significant interobserver and inter-institutional variation in making diagnoses.15 The reproducibility of AUS/FLUS category is at best only fair.7 Significant interobserver variability of thyroid FNA though well established has been reported to be smaller (although still significant) for "benign" and "malignant" categories. AUS/FLUS category is one with the most interobserver variability among the cytopathologists. Differing threshold levels in applying the diagnostic criteria as noted in one of the studies could be a reason for this variability in our study too.17

The findings of our study are consistent with other published studies in literature. The systematic reporting according to TBSRTC has led to clear interpretation of the thyroid FNAC report. The use of this uniform terminology by two reporting pathologists revealed a moderate interobserver agreement that favours its use because of its relative ease of reproducibility. It also provides malignancy risk and management guideline for each category. Thus, the present study encourages the use of TBSRTC as a standardized reporting system in our institution and elsewhere for effective communication among pathologists and clinicians with regard to thyroid FNAC reporting and management.

The authors have no conflicts of interest to declare.

The study was not funded by any source.