Nayak, Kumari, and Agrawal: Immunohistochemical expression of p53 in serous carcinoma of ovary and its correlation with clinicopathological parameters

Immunohistochemical expression of p53 in serous carcinoma of ovary and its correlation with clinicopathological parameters:

Introduction: Ovarian carcinoma is one of the most prevalent causes of mortality associated with carcinoma in women. More than 90% of ovarian cancer originates from epithelial cells. Multiple oncogene and tumour suppressor genes are involved in ovarian carcinogenesis among which p53 gene is found to be most frequently mutated.

Aim: To study the immunohistochemical expression of p53 in serous carcinoma of ovary and its correlation with clinico pathological parameters.

Materials and Methods: This study was carried over 18 histopathologically confirmed cases of serous carcinoma of ovary in VSSIMSR, Burla through a period of 1 year. Analysis of p53 expression was done immunohistochemically.

Results: Out of total 18 cases of serous carcinoma, 14 cases were high grade and 4 cases were low grade. While 78.57% (11) cases of HGSOC were diagnosed in advanced stages (FIGO Stage III and IV); advanced stage (FIGO Stage III) case reported for LGSOC was limited to just 25% (1). Further while only 50% cases of LGSOC were positive for p53 immunostaining, it was 100% in case of HGSOC. Mean value of preoperative CA-125 was high in HGSOC as compared to LGSOC.

Conclusion: The significant difference in p53 expression between HGSOC and LGSOC, indicates an altogether different pathogenesis of these tumours. The aggressive nature of this tumour is also suggested by the higher preoperative CA-125 values in case of HGSOC and diagnosis at a time when the tumour has already advanced.

Ovarian cancer accounts for 2.5% of all malignancies among females and 5% of female cancer deaths because of low survival rates due to late diagnosis.1 Age, family history of ovarian or breast cancer and inheritance of BRCA-1, BRCA-2 gene mutations are significant risk factors associated with increased pre valence of ovarian tumours. Ovarian cancer comprises of group of malignancies differentiated by cell or site of their origin, pathologic grade, risk factors, prognosis, and treatment.3, 2 Epithelial tumours of ovary constitute two third of all the ovarian neoplasm and their malignant forms represent about 90% of all the ovarian cancers.4 Recent molecular and genetic studies suggest that epithelial ovarian cancer can be grouped into two broad categories: Type I and Type II. With clinical differences, there are also notable genetic differences. While, Type 1 cancers are associated with mutations in ARID1A, KRAS, PIK3CA, BRAF and PTEN ; the majority of Type 2 cancers are associated with mutations in p 53.5 Based on recent two-tier binary grading system Serous carcinoma of ovary is now classified into low grade and high grade carcinoma and further suggests that high grade and low grade carcinoma does not represent two different grades of the same tumour but represent two different tumour types instead.6 Based on molecular and genetic studies Low grade serous carcinoma is considered as Type I and High grade serous carcinoma considered as Type II tumour.

LGSOC lacks p53 gene mutations and is considered to arise from borderline tumours. In contrast HGSOC arises as denovo and it has been suggested that 100% of HGSOC are in fact p53 mutated.9, 5

Though, it is considered that Nucleotide sequencing is the most reliable technique to detect gene mutation, but due to time and effort involved, it is rarely used as a diagnostic tool. Therefore Immunohistochemical analysis of p53 expression is commonly used as a mimic for mutational analysis.12, 11, 10

The present study was conducted to evaluate immunohistochemical expression of p53 in serous carcinoma of ovary and its correlation with clinicopathological parameters.

The present study was a single-centre, prospective study. Total 18 histopathologically diagnosed cases of serous carcinoma were considered in the present study. Based on recent two-tier binary grading system, Serous ovarian carcinoma was histologically classified into low grade and high grade. All the relevant clinical history, investigation findings and serum CA-125 value were collected from patient case file. Staging was performed according to FIGO criteria. Immunohistochemical staining was done for p53 with Dako Flex monoclonal mouse anti-human p53 protein clone DO-7 over FFPE tissue sections which were mounted on poly-L-Lysine coated slides. Further sections were deparaffinised and microwave method was used for antigen retrieval. After that endogenous peroxidas e blocking was performed. Then, incubation with monoclonal primary antibody was done for 30 minutes in humidifying chamber. Then, secondary antibody conjugated with horseradish peroxidase enzyme was applied for 30 minutes. Thereafter, freshly prepared di-amino benzidine (DAB) was applied for 10 minutes. Finally haematoxylin was used for counterstaining and slides were then dehydrated and mounted.

Distribution of Serous carcinoma according to two-tier binary grading system 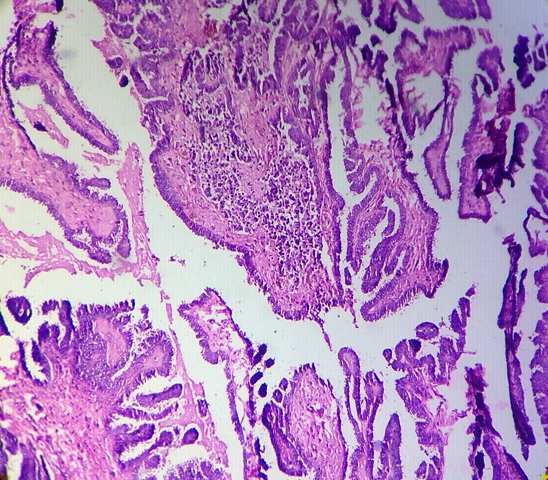 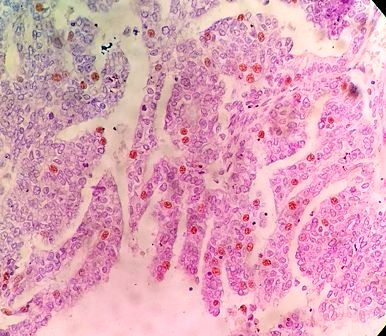 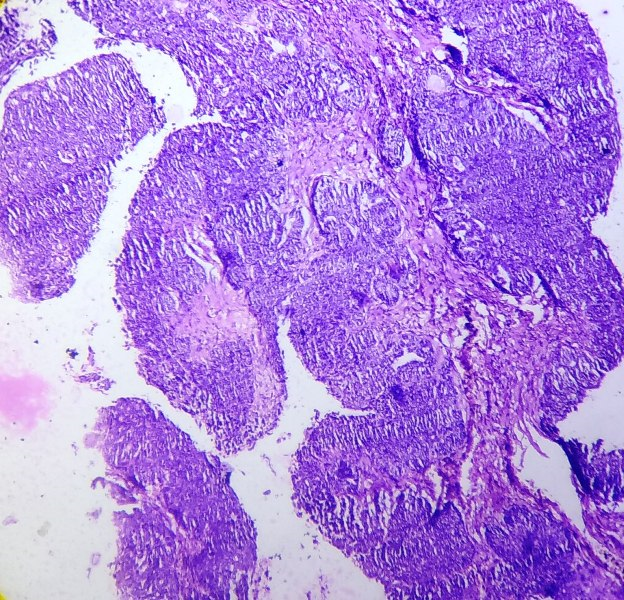 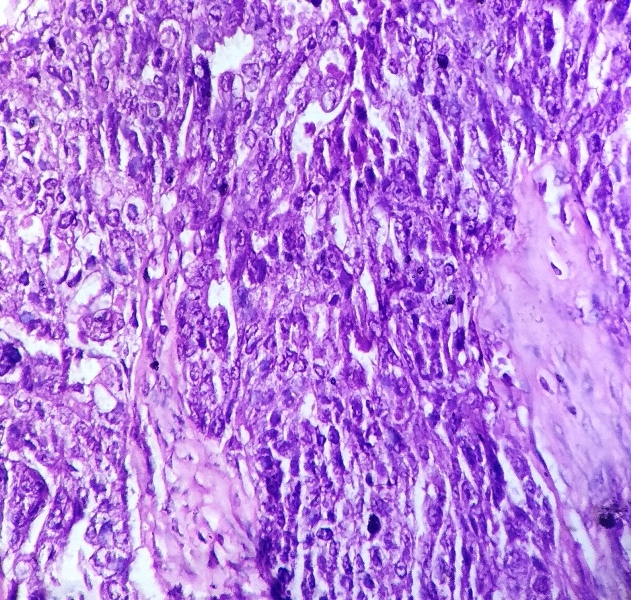 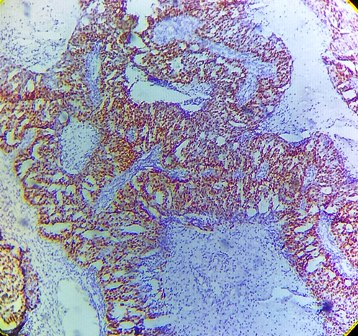 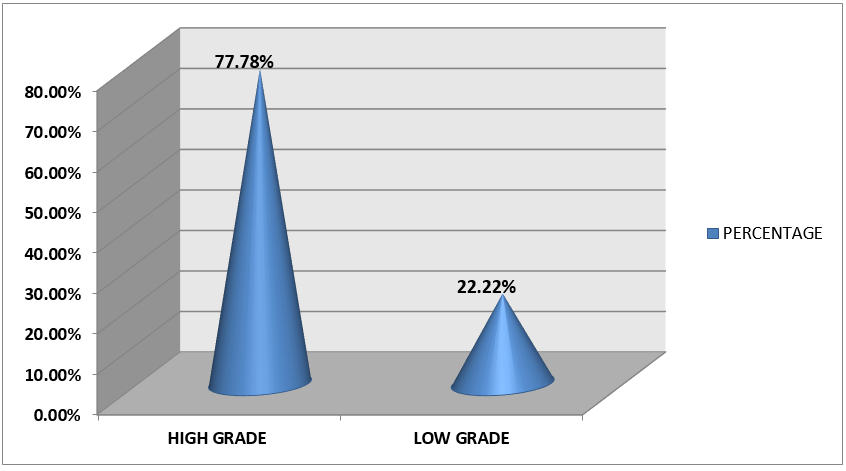 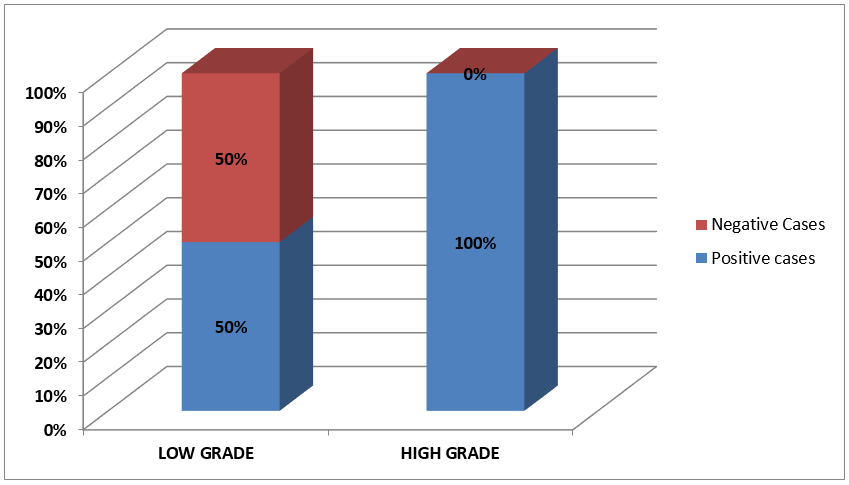 Low grade and high grade serous carcinoma harbour different molecular abnormalities and have different clinical courses. LGSOC are slow growing tumours and have mild to moderate nuclear atypia with occasional mitotic figure. Micropapillary architecture is typical, necrosis is unusual and psammoma bodies are much more frequent (Figure 1). They arise from adenofibroma, atypical proliferative serous tumour or serous borderline tumours and associated with frequent mutations of the KRAS, BRAF or ERBB2 genes. They rarely harbour p 53 mutations and are genetically stable.15, 4, 2 In contrast, HGSOC is rapidly growing, highly aggressive and diagnosed mostly at advanced stages. They are typically composed of solid masses of cells with slit like spaces. Papillary areas are common. Nuclei are large, hyperchromatic and Pleomorphic. Multinucleation is common and mitosis is frequent (Figure 4, Figure 3). Recent studies suggest that a significant number of HGSOC cases originate from the intraepithelial carcinoma in the fallopian tube.17, 16, 15, 4, 2

HGSOC cases are associated with higher CA-125 values and have worse prognosis when compared with LGSOC.18 The two types of serous ovarian carcinoma harbour different molecular abnormalities and have different clinical courses. These data from the literature were confirmed in our study.

Sallum et al18 in their study observed that women with HGSOC accounted for a significantly higher proportion of advanced stage disease (80% vs 42.9%,p<0.001) compared with women having LGSOC. Similar findings were observed in the present study with cases in advanced stages accounting for HGSOC being much higher than LGSOC (78.57% vs 25%, p<0.001).

Limitation of our study

A Yemelyanova R Vang M Kshirsagar Immunohistochemical staining patterns of p53 can serve as a surrogate marker for TP53 mutations in ovarian carcinoma: an immunohistochemical and nucleotide sequencing analysisMod Pathol20112412481253