Introduction: The most common lesions encountered in HIV positive patients is Lymphadenopathy. The cytopathology of these masses encompass a variety of changes that provide insight into the underlying condition associated with HIV. The present study analyzed the cytological patterns of lymph node lesions in HIV/AIDS patients by FNAC (Fine Needle Aspiration Cytology) and correlate its findings with serum CD4 counts.

Materials and Methods: A total 75 cases of all genders and age, already diagnosed as seropositive by ELISA and presented with lymphadenopathy of ≥ 1 cm were studied in pathology department by FNAC during the period of 1 and half year. Smears were fixed in ethanol (95%) for PAP (Papanicolaou Stain) staining. Air dried smears were kept for MGG (May Grunwald Giemsa) and AFB (acid fast bacilli). The serum CD4 count was assessed by BD FACS Count System.

Conclusion: For HIV lymphadenopathy patients, FNAC is the simple and effective diagnostic modality which helps in identification of majority of the granulomatous, reactive and opportunistic infections. It therefore, helps in guiding subsequent management of these patients.

HIV (Human immunodeficiency virus) infection and its resultant AIDS (acquired immune deficiency syndrome) have become a global pandemic.1 In 1981, AIDS was first recognized in United States. In 1983, HIV was isolated from lymphadenopathy patient, and demonstrated to be the causative agent of AIDS in 1984.2 HIV disease can be classified as per immunodeficiency into an early stage [cluster of differentiation (CD)4 > 500/ μL], an intermediate stage (CD4 = 200-500/ μL), and an advanced stage (CD4 < 200/ μL).4, 3

The major anatomic site for establishing and propagation of HIV infection are lymph nodes, which form the bulk of lymphoid tissue. Lymphadenopathy may also be a manifestation of opportunistic infections, lymphoid malignancy developing in an immunodeficient individual but it is one of the initial manifestations of HIV.6, 5 The most useful diagnostic procedures for HIV patients with lymphadenopathy are lymph node biopsy (Gold standard), but the method has several disadvantages.7

FNAC can serve as conveniently substitute method practiced for the diagnosis of opportunistic infection in HIV/AIDS, for example Toxoplasmosis, Histoplasmosis, Tuberculosis and malignant condition like Kaposi’s sarcoma and lymphoma.8 In the assessment of lymphadenopathy particularly in HIV-positive patients, FNAC method has become the primary investigative procedure. This process is fast and easy to accomplish and sometimes can be avoided excision while monitoring the following therapy.9 The use of a simple investigative tool to rapidly identify the cytomorphological patterns in lymphadenopathy of seropositive cases, and in turn initiate therapy directed specifically towards the disease can help reduce the already excessive burden on HIV patients.

Hence, current investigation was carried out to assess the role of FNAC as a cytological diagnostic measure for the judgment of numerous lesions in HIV lymphadenopathy and correlate its findings with serum CD4 counts.

After obtaining Institutional Ethical Committee approval and written informed consent from the patients, the hospital based cross sectional study was carried out over a period of one and half year in Pathology department of Tertiary Health Care Centre. A total 75 cases of all genders and age, already diagnosed as seropositive by ELISA and presented with lymphadenopathy of ≥ 1 cm were involved in the study. Patients who are not agreeable to contribute in the study were excepted from the study.

All HIV positive patients having lymphadenopathy were subjected to FNAC in pathology department of cytology OPD. The inflammation was localized by cautious palpation and position was cleaned with spirit and fixed in a favorable site with one hand. A 23 or 24 gauge needle was attached to a 20cc syringe fitted with comeco syringe pistol. The needle was inserted through the skin with quick motion and advanced into the swelling. By noting the resistance encountered on puncture, it was ensured the needle was in lymph node. After puncturing swelling negative pressure was produced by withdrawing the nozzle of pistol. The needle was moved to and fro within node maintaining negative pressure. Once aspirate was observed at the junction of needle and hub, aspiration was stopped by releasing vacuum in syringe. The needle was withdrawn from the lymph node, content of needle carefully expressed on to the glass slide. Smears were prepared with use of flat surface of another slide by applying pressure. Smears were instantaneously fixed in 95% ethanol for PAP staining. 10 Air dried smears were reserved for MGG.10 and AFB.10 The serum CD4 count of the patient was assessed by BD FACS Count System (immunocytometry system).11

Data collected was entered simultaneously into “Statistical Package for Social Scientists” (SPSS) software version 17.0 and coded appropriately. Results are presented in the form of tables, pie chart and bar diagrams. Findings were compared against findings from similar studies and discussed.

Distribution of cases as per age and sex

Distribution of cases as per cytological diagnosis 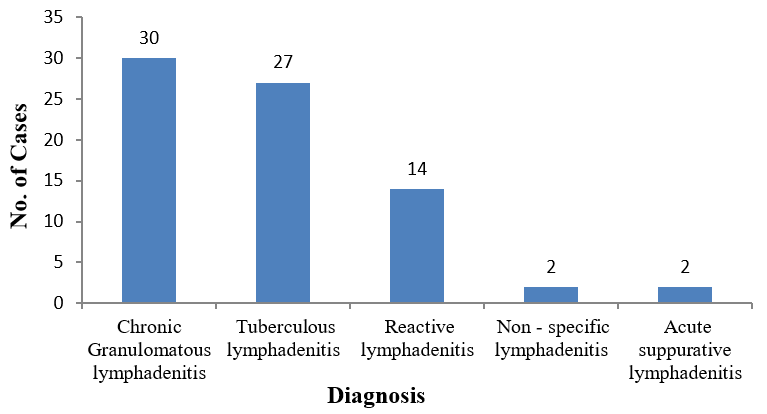 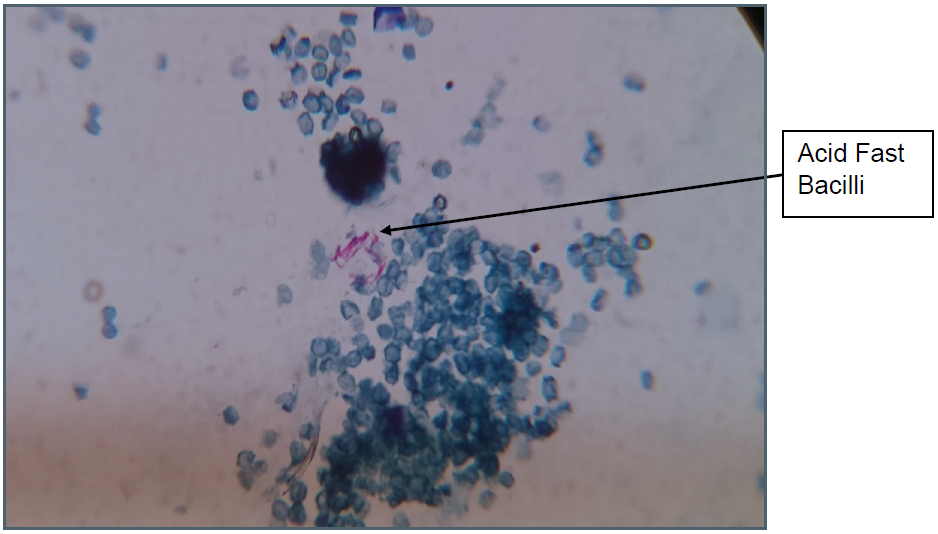 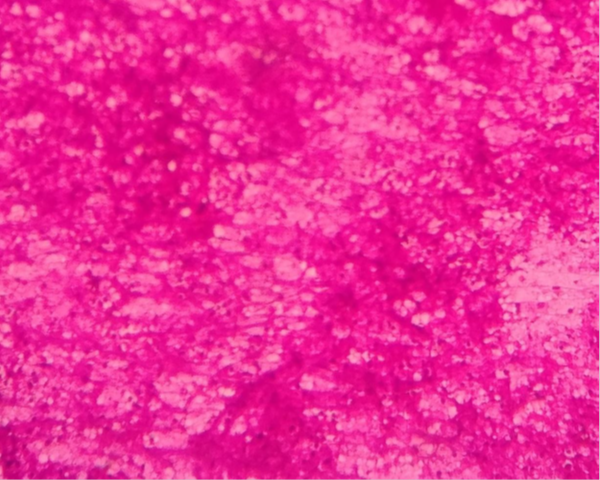 In present investigation, the prevalence of HIV lymphadenopathy was more observed in males particularly in 4th decade of life and majority of females of 21-30 years age group. Many HIV patients had involvement of cervical lymphadenopathy followed by axillary. Our study correlated well with the previous studies.13, 12, 7, 6, 5 Chronic granulomatous lymphadenitis is the most common cytological diagnosis which is quite in contrast to other studies conducted in the Indian subcontinent,17, 16, 15, 14 where the main contributor was mycobacterial infection. This could suggest an increased incidence of HIV positive patients already on HAART and Anti Tubercular drugs before presenting with lymphadenopathy in cytology OPD, therefore showing paucity of AFB on smears. However, Reid et al18 also had a lesser incidence of mycobacterial cases which may be due to less overall incidence of tuberculosis as an opportune pathogen. This study had reactive lymphadenitis as the most common diagnosis (51%), whereas the present study had only 18.6% cases with reactive findings. No cases of lymphoma were found in the current study.

In tuberculous lymphadenitis cases, the most common cytomorphological pattern was caseous necrosis with epithelioid cells and another common pattern was caseous necrosis in contrast to Surase et al16 where the second most common was epithelioid cells only. 3 of the total 27 tuberculous lymphadenitis cases showed features of acute suppuration with positive Ziehl Neelson staining. Simil ar findings were seen in study done by Kumarguru et al5 and Gorva et al.13

Only two cases of acute suppurative lymphadenitis were identified, both having a serum CD4 cell count between 200 – 499 cells/ μL (mean = 220.5). Similarly, only two cases of non – specific lymphadenitis were diagnosed with extremes of serum CD4 value. One had a value of 52 cells/ μL and the other with a value of 551 cells/ μL. Hence, no definitive interpretation of this finding could be established.

FNAC of lymph node is very helpful in segregating cases that need further assessment. One of the major opportunistic infections detected in both symptomatic as well as asymptomatic patients was Tuberculosis. Therefore, ZN staining should always be done for detection of AFB in spite of the cytological picture not suggesting it. Correlation of cytological diagnosis with serum CD4 T lymphocyte count gives invaluable information regarding stage of the disease and immune status.

Hence, FNAC is the easy and very effective diagnostic modality for HIV lymphadenopathy patients. It helps in the identification of majority of the granulomatous, reactive, and opportunistic infections. It therefore, helps in guiding subsequent management of these patients.

S G Surase A B Deka V N Solanke B A Devi FNAC of HIV lymphadenopathy in a tertiary care hospital: a two year studyJEMDS201655940814085